For 400 children, a fun Christmas party showed the reason for the season 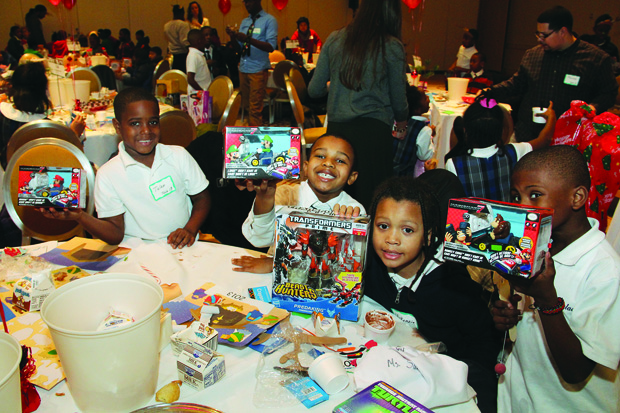 Children attending the Archbishop's Christmas Benefit for Children happily show off the gifts they received at the party Dec. 19. (Sarah Webb) 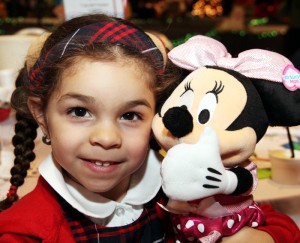 A young girl, one of thousands served by Catholic Social Services this year, loves the present she received at the Cardinal’s Christmas Benefit for Children. (Sarah Webb)

Santa Claus doesn’t usually read aloud the letters he receives from children, but some are just too good not to share. Take one of the many letters he received during a stop at the 57th Archbishop’s Annual Benefit for Children held Dec. 19 at the Sheraton Philadelphia Center City Hotel.

How are you and how is Mrs. Claus?
I love Christmas, but it’s not all about receiving gifts, it’s about Jesus.
Some kids don’t know about that.
Merry Christmas and say Hi to the reindeer for me.
Dawn

Santa (aka Douglas Dunn, theology teacher at Pope John Paul II High School), clearly feels the same, judging by the way he knelt in prayer before the manger of Baby Jesus before undertaking his gift-giving chores at the party.

It’s a tradition begun by Archbishop John F. O’Hara and a replication of his program when he was bishop of Buffalo. The party is given for a representative group of the many children assisted through Catholic Social Services of the Archdiocese of Philadelphia, while at the same time raising funds from benefactors to assure the work will continue in the future.

In the early days it was usually held at the Benjamin Franklin Hotel; in recent decades the Sheraton has been the venue. And in those years the children were mostly drawn from residential institutions conducted by the archdiocese for children at risk.

Due to changes in child assistance philosophy those institutions no longer exist. Now the 400 or so needy children invited to this year’s party come from parish-based programs, especially after-school programs. The children represent the 162,000 children and adults of all faiths who yearly benefit from Catholic Social Services’ programs.

“I always tell people if they are feeling low they should come to this. It will definitely lift their spirits,” said Bishop John McIntyre.

“We love you very much you are all very special,” Archbishop Charles Chaput told the children.

“In a little while Santa is going to give you a gift. The reason we celebrate Christmas is because many, many years ago God gave us the greatest gift — the birth of his Son.”

Compared to recent years, the entertainment was simpler; with the emphasis on “the reason for the season.” It began with entrance caroling by the St. Charles Borromeo Parish Choir of South Philadelphia, and a performance by the All-Catholic Jazz Band. In the main ballroom Spirit Dancers from DePaul School in Germantown and singer Kamal Bostic-Smith from St. Martin de Porres Parish in North Philadelphia entertained the children.

Finally about 200 young people in the Delaware County-based Catholic Community Choir, under the direction of Jeff Braconnier, sang and performed the skit, “A Charlie Brown Christmas.”

Anyone who has ever seen the beloved Charles Schulz classic TV show knows the message of the program is the simplicity of the true meaning of Christmas.

“I think the Catholic Community Choir did a wonderful job,” said Jacki Delaney, who was in her fifth year as chair of the event. “They are a talented group of children. Each year this gets better and better.”

Sitting with a group of little children from Chester County, Delaney remarked, “Some of these children have never been in a car before; it was a real treat for them to come down to Philadelphia.”

But it goes without saying some of the children receive very few presents Christmas or anytime.

Julia got an art set, Paul got Legos. Isabelle and Ayonna both got dolls. It was a good day.

That goes for the adults too.

“I always tell people if they are feeling low they should come to this,” remarked Bishop John McIntyre, who oversees Catholic Human Services. “It will definitely lift their spirits.”