Archbishop Wood puts it in gear for second half, emerges with Class AAA state title 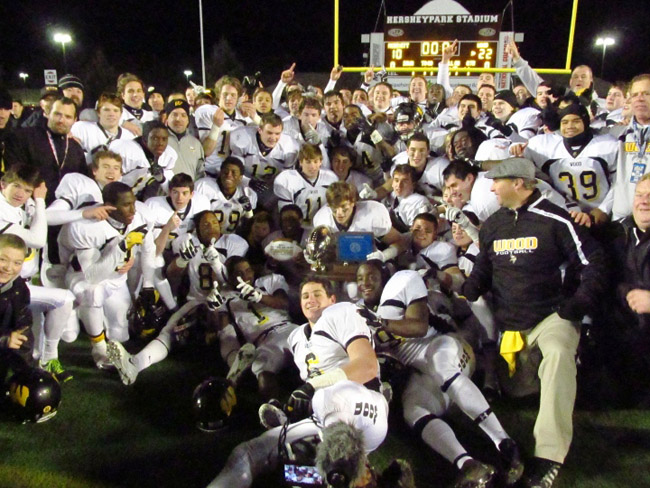 That was the collective message uttered by the Archbishop Wood underclassmen during halftime of Friday night’s PIAA Class AAA state championship at Hersheypark Stadium.

Although they trailed Harrisburg’s Bishop McDevitt, 3-0, the younger Vikings had no intention of allowing their seniors the ignominy of finishing their career with a loss.

“We’re not usually behind our opponent,” said eminently likeable Wood junior Jake Cooper. “I wouldn’t say that we were worried, but it was definitely something we weren’t used to. But if this was going to be the seniors’ last game, for some of them maybe the last game they would ever play, something had to change.”

Once they emerged from the warmth of the locker room — a strong contrast to the frigid conditions awaiting them outside — the Vikings took over the game.

Actually, “took over” is putting it far too mildly.

Wood totally dominated. Possessing the ball for more than 80 percent of the final two quarters, the Vikings scored 22 unanswered points before allowing a meaningless kickoff return touchdown inside the final two minutes.

Playing in their third consecutive state final, the 22-10 Vikings’ victory was their second state title in three years. A month earlier, the Vikings had seized their sixth straight Catholic League championship.

As for which accomplishment was more special, there’s no debate. No, truly, there is no debate.

“They’re both great in their own right,” Cooper said. “They’re both very separate. We wouldn’t trade either of them for anything.”

Being part of the state’s most successful program over the past three seasons has bestowed significant pressure upon anyone that dons a black and gold jersey.

In other words, while some teams would be happy just to reach the final, that isn’t the case at Archbishop Wood.

“The 2011 team set the bar for us,” said Cooper, a product of Our Lady of Mount Carmel Parish in Doylestown. “None of us mind that. It’s OK that we’re expected to win. Our players are very mature. We know we’re young, but we also know how to execute. We have been taught to keep control on and off the field.”

Speaking of control, the Vikings controlled the second-half clock in epic proportions. They ate up 5 minutes, 11 seconds before taking a 7-3 lead on Jarrett McClenton’s four-yard touchdown run. After forcing a punt, Wood took possession with 4:11 left in the third quarter and utilized the next — this is not a misprint — 12 minutes and six seconds.

Yep — more than an entire quarter. The best part was that the 21-play, 97-yard drive was punctuated by sophomore quarterback Tom Garlick’s one-yard plunge to give the Vikes a 14-3 lead.

After being stopped on a four-down desperation drive, the Vikings scored yet again when McClenton bolted 15 yards for a TD. His second score and his 238 yards on 40 carries – an AAA tournament record — gave him an astounding, two-season total of 2,348 yards rushing and 42 touchdowns.

What is scary about that? Other than senior Oliver, every one of those linemen is a junior. Most of the defense is junior laden as well. Plus McClenton is a junior and Garlick a sophomore.

In other words, Wood figures to be even tougher next fall.

Among Wood’s most impressive figures is Cooper, whose best position is at linebacker. Against McDevitt, Cooper made six solo tackles and added a sack while teammate Chris Gary (two sacks, six tackles) and Spahits (six tackles) followed suit.

“I can’t say enough about our defense,” said Steve Devlin, who has now won 84 of his 100 games as Wood’s head coach. “Jake Cooper … our defensive line … our ends … (defensive coordinator) Mike Carey … they all did a great job. Defense is all about heart and desire. They went out there and executed. Awesome job.”

Reached again a few days after the championship, Cooper admitted that his body still felt sore, particularly his legs. But, as he prepares for a wrestling season that begins with him being ranked eighth in the state in the 220-pound division, Cooper said he has nothing to complain about.

“No way,” he said. “I’m just blessed to have all of this. I couldn’t be more thankful.”

The rest of the Archbishop Wood faithful undoubtedly concurs.