Divisions among Christians are ‘a scandal,’ pope says at audience 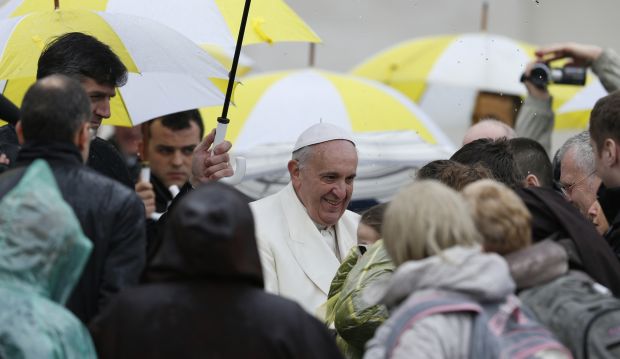 VATICAN CITY (CNS) — The divisions that exist among Christians are a source of pain and scandal, and damage the credibility and work of spreading the Gospel, Pope Francis said.

“Christ’s name creates communion and unity, not division. He came to create communion among us, not to divide us!” the pope said during his general audience address Jan. 22 in St. Peter’s Square.

The pope’s audience took place during the annual Week of Prayer for Christian Unity Jan. 18-25. A group of Christians from different communities in Canada chose the theme for the 2014 observance — “Has Christ been divided?”

The pope dedicated his catechesis to the week of prayer’s theme, taken from St. Paul’s First Letter to the Corinthians.

As St. Paul reproached the Corinthians for their divisions and rivalries, he asked them, “Is Christ divided?” the pope said.

“Christ has certainly not been divided. But we have to recognize with sincerity and with sorrow that our communities continue to live divisions that are a scandal,” the pope said.

“Divisions among Christians are a scandal. There is no other word for it. A scandal!” he said to applause.

Christians have two important elements in common: baptism and the cross, he said.

However, divisions among Christian communities “weaken the credibility and the effectiveness of our efforts to evangelize, and they risk empting the cross of its power” and meaning, he said.

St. Paul reminds Christians to rejoice in the gifts God has given to other Christians, “gifts which we can receive from them for our enrichment,” Pope Francis said.

After his main catechesis, the pope addressed Arab Christians in the square, especially those from Egypt, asking them to never let the faith be used to divide, but to join in communion with God and their brothers and sisters.

Let the Lord’s name be proclaimed, not to shut people out, but “to open the heart to love which unites and enriches,” he said. “Let’s pray that the Lord grants unity to Christians, living differences as a richness; seeing the other as a brother to welcome with love.”

PREVIOUS: After Christmas, now the Ordinary – and the sacred

NEXT: How to fit pre-Cana prep in a long-distance romance