Catholic Charities Appeal aims to give hope in 2014 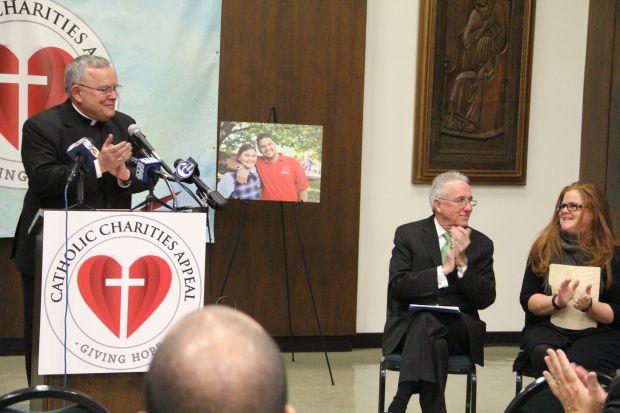 Archbishop Charles Chaput (left) and Joseph Sweeney of Catholic Social Services applaud Patricia DiGiuseppe, whose daughter attends a school for blind children that benefits from the Catholic Charities Appeal. The archbishop announced the launch of the 2014 appeal in the archdiocese Jan. 23. (Photos by Sarah Webb)

The Catholic Charities Appeal is launching its 2014 fundraising drive with high hopes it can meet its goal of raising $10 million.

That’s a well-founded hope because the appeal exceeded the same goal in last year’s appeal, Archbishop Charles J. Chaput announced at a press conference Thursday, Jan. 23 at the Archdiocesan Pastoral Center in Philadelphia. “Giving Hope” in fact is the theme of this year’s appeal.

The archbishop in his remarks said donations to last year’s appeal exceeded the goal “for the first time in many years.” Perhaps most significant is the fact that the number of donors has almost doubled from 37,500 to more than 70,000 last year, he added.

The Catholic Charities Appeal is the Archdiocese of Philadelphia’s largest single fundraiser each year. It supports more than 80 outreach programs of the archdiocese, including soup kitchens and shelters for the homeless, senior centers, hospices and educational programs for at-risk youth and children with disabilities.

One of these is St. Lucy Day School for Children with Hearing Impairment. The archdiocesan special education school is literally a Godsend to the family of one girl, third grader Shannon DiGiuseppe, whose mother Patricia described through strong emotions the journey that led her daughter to the school.

She first noticed then 4-year-old Shannon could not see a glass of milk and had to feel a table’s edges to reach the glass. After a diagnosis revealed a tumor on the girl’s brain that was pressuring her optic nerve, surgery successfully removed the tumor.

But damage to the nerve meant Shannon would never see again. 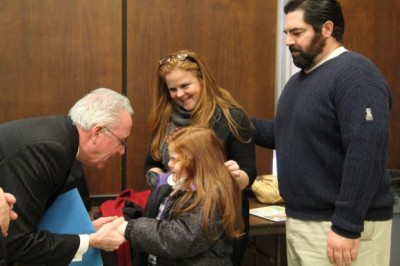 Patricia said she and husband Steve both felt the “quiet presence of God” when they visited St. Lucy’s. That experience of faith put them at ease, and “it was clear that we would be OK, even if Shannon would only see again in her dreams,” Patricia said.

They soon enrolled their daughter in the school. Now Shannon is a third grader and thriving, able to read and write in Braille and enjoying the school and the friends she’s made there.

“Through the Catholic Charities Appeal, and your generosity, we are able to receive help with tuition,” said Patricia, mother of four children. “I cannot fully express how amazing the support from St. Lucy’s has been.”

(Watch a video of Shannon’s story and learn more about the appeal here.)

Programs like St. Lucy’s and all those that benefit from the Catholic Charities Appeal serve all people regardless of race, religion or economic status.

And they do so throughout every day of the year, said Joseph Sweeney, who leads Catholic Social Services as secretary of Catholic Human Services for the archdiocese. 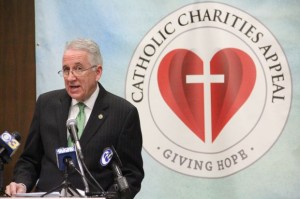 More than 80 outreach programs, mostly of Catholic Social Services, benefit from the Catholic Charities Appeal, whose theme this year is Giving Hope. Joseph Sweeney, secretary for Catholic Human Services of the Philadelphia Archdiocese, speaks at the press conference that launched the appeal Jan. 23. (Sarah Webb)

Sweeney listed some of the programs that serve all people during a typical day: 300 at-risk youth attending academic day programs; more than 500 senior citizens going to senior centers for lunch and company “to keep them active and healthy;” 400 homeless men and women receiving a hot meal and social interaction; 700 children in poor or high-crime neighborhoods attending after-school programs; nearly 600 developmentally disabled children and adults learning and growing in safe settings; dozens of women in crisis pregnancies receive counseling, prenatal care and material assistance to deliver healthy babies; people from hundreds of households in the archdiocese receiving support, counseling and child care; and at night, more than 1,000 persons with disabilities, the homeless and at-risk youth finding a bed in a healthy, safe environment.

In total, more than 200,000 people a year are served regardless of their faith by archdiocesan programs that benefit from the Catholic Charities Appeal.

And the needs of those people, and others, continue to grow, Archbishop Chaput noted.

“This was evident last year when $5 billion was trimmed from the federally funded nutrition assistance program,” he said. “The deep cut seriously affected the region and our own Nutritional Development Services,” placing an extra burden on parish- and community-based food pantries stocked by NDS, especially during cold months.

“Those of you who supported the Catholic Charities Appeal (last year) raised close to $400,000 for the hungry and undernourished children and adults in our region,” Archbishop Chaput said.

“Your generosity will bring meaningful spiritual and material assistance to those most in need. Your participation will surely make a difference in the lives of those we serve and for future generations to come. Please know that your kindness and generosity really matter.”

One of the reasons for the success of last year’s appeal, according to CCA board member Gloria Coyne, is the involvement of the Catholic Foundation of Greater Philadelphia. The new foundation was formed last year as an entirely separate organization from the archdiocese to raise funds for initiatives like the Catholic Charities Appeal and other needs.

Because it is not a part of the archdiocese, donors may feel more confident in making their donation to Catholic initiatives through the foundation now, and perhaps with larger gifts in the future, Coyne believes.

Visit the website of the Catholic Charities Appeal to learn more about it and its beneficiary programs, and to make a donation.

PREVIOUS: Philadelphians make it through snowstorm to join March for Life

NEXT: Local Ukrainian Catholic faithful to pray for justice in their homeland