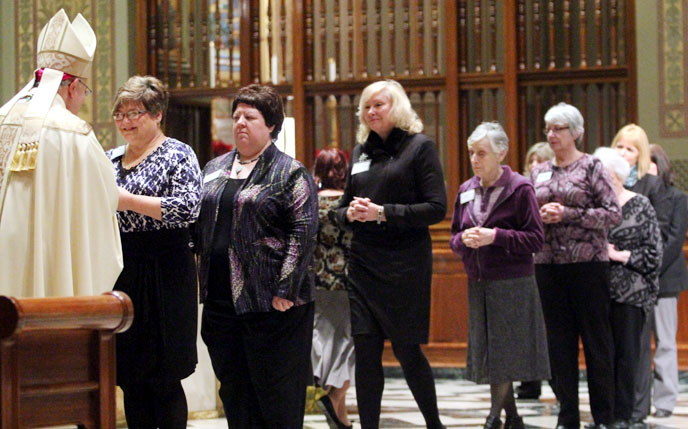 Women prepare to receive from Archbishop Charles Chaput the St. Charles Borromeo award for 25 years' service as parish religious educators, during a Mass and ceremony Jan. 11 at the Cathedral Basilica of SS. Peter and Paul in Philadelphia. (Photos by Sarah Webb) 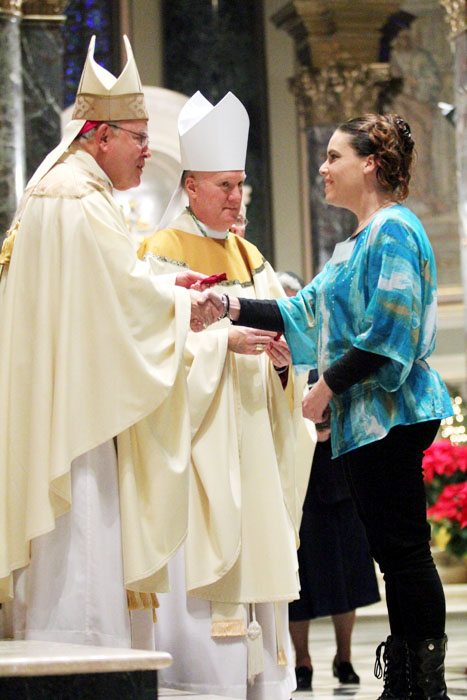 The 250 or so women and men (at very least 90 percent women) who were honored at the Cathedral Basilica of SS. Peter and Paul on Jan. 11 were really stand-ins for thousands of other equally worthy laborers in the vineyards of the Lord.

This was the annual Mass and award ceremony for Parish Religious Education Programs throughout the Archdiocese of Philadelphia. With parish school attendance a mere fraction of what it was in past generations, these mostly lay catechists are the unpaid face and voice of the Catholic Church for countless boys and girls.

“This is an opportunity for us to gather together to give thanks for the tremendous work they do,” said Father John J. Ames, deputy secretary for Catechetical Formation in the archdiocese. “They are the folks who are on the front lines of the catechetical mission of the Church. They are the ones who are in the classroom really conveying the teachings of Jesus to another generation so that this generation might fall in love with him and ultimately be transformed by him.”

(See a photo gallery from the Mass and ceremony here.)

Archbishop Charles Chaput, who was the principal celebrant and homilist for the Mass and presider at the awards ceremony, stressed not so much the role of catechist in his homily as he did the role of evangelist.

“The church for many generations has been very good at catechizing, teaching the faith. What we haven’t been so good at is evangelizing,” he said. “We haven’t passed on the excitement about being Christian.”

At the heart of what teachers and catechists do “is to share the Good News of the transformation of human nature that takes place because of God’s love for us,” the archbishop said.

(Watch a video from the awards ceremony here.)

Special awards were also given to select members of the Archdiocesan Association of Parish Directors, Coordinators and Administrators of Religious Education.

“Catechetical ministry is essential to our diocese,” said Anne Hayes, president of the association. “We assist parents in forming their children in our faith; we help them in preparation of their families.”

The Archdiocese of Philadelphia’s Pope Paul VI Award for Catholic Leadership was given posthumously to Harrisburg Bishop Joseph P. McFadden, who died suddenly on May 2, 2013.

Bishop McFadden, who was Philadelphia born, was a lay teacher at West Catholic High School before his ordination as a priest, then a priest secretary to Cardinal John Krol, president of Cardinal O’Hara High School, and a parish pastor. As an auxiliary bishop of Philadelphia, he oversaw Catholic education until his 2010 appointment to Harrisburg.

At the Mass and ceremony to accept the award for him were his brother John and his sisters Ellen McConey and Sister Jane McFadden, I.H.M.

“It’s a nice honor,” Sister Jane said. “We have to educate the youth and if we don’t do that the church is missing a lot. Young people have so much to give to the church and to bring to us.”

A videotaped retrospective on Bishop McFadden’s life ended with him saying, “Pray for me as I pray for you, that all of us may follow Mary the Mother of Jesus and the model for all disciples as we seek, like her, to make Jesus the center of our lives, and the reason for all that we do.” 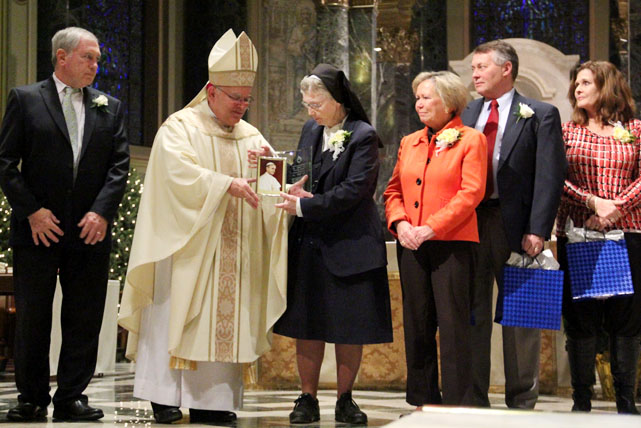 NEXT: Confirmation schedule for parishes in Philadelphia Archdiocese annnounced