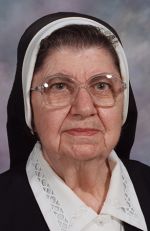 Sister St. Francis Coco, O.S.F., died Jan. 26 in Assisi House, Aston, at age 93. She had been a professed member of the Sisters of St. Francis of Philadelphia for 62 years. Sister St. Francis (Marie Theresa Coco)  was born in Boston, Mass. Before entering the congregation in 1950, she worked in Filene’s Department Store. She professed her first vows in 1952 and served primarily in domestic work in the various convents where she lived.

Sister St. Francis ministered for 36 years in the Archdiocese of Philadelphia. From 1978-2010 she assisted in both the dining room and the mail room at Our Lady of Angels Convent, the congregation’s motherhouse in Aston. In 2010 she moved to Assisi House where she served in prayer ministry until her death. Additional ministry in Pennsylvania included St. Joseph Convent in Lancaster (1961-1962).

She also served for 12 years in the Diocese of Trenton, including kindergarten teacher at St. Rose of Lima School in Freehold, N.J.

The funeral Mass for Sister St. Francis was celebrated Jan. 31 in Assisi House. Burial followed in Our Lady of Angels Cemetery in Aston. Sister St. Francis is survived by nephews, nieces and her Franciscan family. Donations in her name can be made to the Sisters of St. Francis Foundation, 609 S. Convent Road, Aston, PA 19014.

NEXT: Born in Ireland, Franciscan sister served for 74 years before death at 92