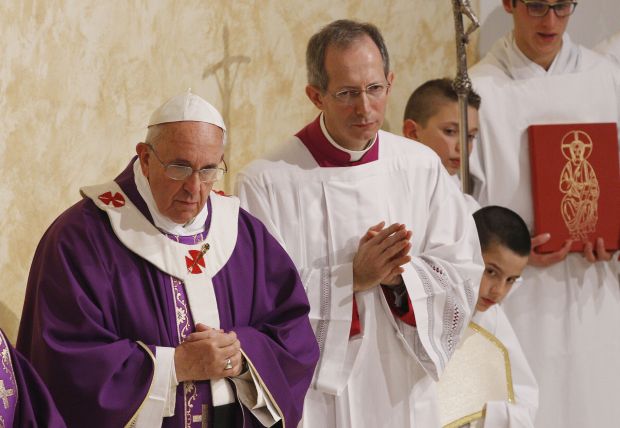 VATICAN CITY (CNS) — In his first message for Lent, Pope Francis called on Christians to follow Jesus courageously as they seek out the poor and sinners, and to make difficult sacrifices in order to help and heal others.

Christians are called to confront the material, spiritual and moral destitution of “our brothers and sisters, to touch it, to make it our own and to take practical steps to alleviate it,” the pope said in his first message. (See the full text of the message here.)

Saving the world will not come about “with the right kind of human resources” and token alms, but only “through the poverty of Christ,” who emptied himself of the worldly and made the world rich with God’s love and mercy, Pope Francis said.

Released by the Vatican Feb. 4, the text of the pope’s message focused on the theme of Christ’s poverty, with the title: “He became poor, so that by his poverty you might become rich,” which is from a verse from St. Paul’s Second Letter to the Corinthians.

Pope Francis said he chose the passage to explore what St. Paul’s references to poverty and charity mean for Christians today.

All Christians are called “to proclaim the liberating news that forgiveness for sins committed is possible, that God is greater than our sinfulness, that he freely loves us at all times and that we were made for communion and eternal life,” Pope Francis wrote.

There are many forms of poverty, he said, like the material destitution that disfigures the face of humanity and the moral destitution of being a slave to vice and sin.

But “there is only one real kind of poverty: not living as children of God and brothers and sisters of Christ,” he said.

People experiencing the spiritual destitution of believing they don’t need God and can make it on their own “are headed for a fall,” the pope wrote. “God alone can truly save and free us.”

“The Gospel is the real antidote to spiritual destitution,” he said, and the greatest treasure of all is “boundless confidence in God” and the desire to always do his will.

All Christians are called “to proclaim the liberating news that forgiveness for sins committed is possible, that God is greater than our sinfulness, that he freely loves us at all times and that we were made for communion and eternal life.”

Spreading the joy of the Gospel, consoling broken hearts and offering real hope means “following and imitating Jesus, who sought out the poor and sinners,” and by opening up “new paths of evangelization and human promotion” with courage, he said.

Imitating Christ also includes confronting the abuses, discrimination and violations against human dignity, which often cause the material poverty suffered by those who lack the basic rights to food, water, work, development and “equal access to education and health care,” he said.

Sometimes the unjust social conditions that rob people of their dignity lead to moral destitution — a kind of “impending suicide,” he said.

Think of how much pain is caused by people, especially the young, when they turn to alcohol, drugs, gambling, pornography or other vices because they “no longer see meaning in life or prospects for the future,” he said. “How many have lost hope!”

“By loving and serving the poor, we love and serve Christ,” he said, but such service also entails conversion.

“When power, luxury and money become idols, they take priority over the need for a fair distribution of wealth. Our consciences thus need to be converted to justice, equality, simplicity and sharing,” he said.

While Lent is a time for “self-denial,” don’t forget that real sacrifice and poverty have a “dimension of penance” and pain, he said.

“I distrust a charity that costs nothing and does not hurt,” he said.

“God did not let our salvation drop down from heaven, like someone who gives alms from their abundance out of a sense of altruism and piety,” the pope said.

God operates according to “the logic of love, the logic of incarnation and the cross” — to be with those who need him most, “to take upon himself the burden of our sins” and to comfort, save and free people from their misery.

“What gives true freedom, true salvation and true happiness is the compassion, tenderness and solidarity of his love, Christ’s poverty, which enriches us,” he said.

The cardinal said the pope’s message reminds people that their “bourgeois consciences” cannot be put to rest merely by “denouncing the lack of resources for others” or denouncing the structural underpinnings of poverty.

The only way to truly help people is to care for all their needs — spiritual, material and moral — the cardinal said, and not “pretend to solve a person’s problems just because one has solved the problems related to his physical and material wellbeing.”

“I think the Holy Father does well to insist on these three types of poverty and destitution,” the cardinal said.

“There’s the destitution of material poverty that’s easier to solve because it takes a bit of money and one can find ways to resolve this problem. But it’s much more difficult to (address) moral and spiritual destitution,” which is why Cor Unum and the church put added emphasis on that area.

The church urges people to choose the poverty of Christ in order to fight the misery and destitution in the world — not for ideological reasons, the cardinal said, “but for the love of Christ.”

PREVIOUS: Pope Francis’ message for Lent 2014: An invitation to evangelical poverty in our time