The light and divinity of Byzantine art 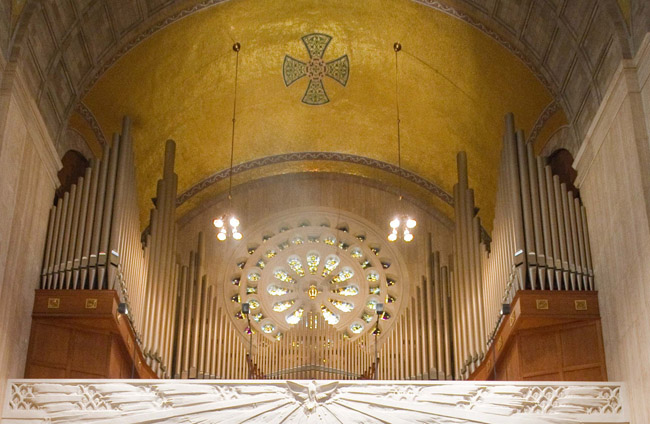 Byzantine-style mosaics are still being created, such as the South Gallery Vault Mosaic shown above at the Basilica of the National Shrine of the Immaculate Conception in Washington. It was blessed by Washington Cardinal Donald Wuerl Jan. 2. (CNS photo/Matthew Barrick)

Standing in awe of Byzantine art being displayed at the National Gallery of Art in Washington, D.C., I wondered why it is so splendid. The mosaics and icons are flat and somewhat stiff, whereas paintings and frescos of other artists are often multidimensional and filled with expression.

When I returned home from the exhibit, I did some homework to learn about the meaning behind Byzantine art.

One of the church domes in the exhibit contains a large mosaic that portrays Christ against a glimmering gold background. I learned that the background represents the ethereal heavenly realm we read about in the Book of Revelation. I have to wonder if this is why we get thrilled when seeing a beautiful sparkling object and say it’s “heavenly.”

Why does Byzantine art employ mosaics frequently? It is because they were seen as the supreme media for expressing our adoration of God. Creating a mosaic is an extremely expensive technique involving the insertion of colored stones, or gold and silver fused in glass. These are then put onto fresh plaster to create wall and ceiling images of virtually indestructible brilliance.

As I viewed the mosaics, their color and light engulfed me, creating an uplifting, sacred spirit.

Why are there long, thin figures in Byzantine art? It is because in early Christianity fasting and mortification were considered blessed practices of the saints. The flat and stiff figures in icons also countered early Greek and Roman figures that endeavored to portray the perfect figure of a man and woman that never really exists. Mosaics and icons are more about the meaning of God than about the unrealistic perfect body.

Byzantine art also had a political side to it. When Constantine became emperor of the Roman Empire, he realized there is only one king in our life: Christ; hence the reason Christ is often portrayed in kingly fashion.

In his book, “Yours Is the Church,” author Mike Aquilina says that when we see the greatest talents in the history of art seized by an idea and producing their greatest masterpieces, we have got to say that it must have been a powerful idea.

I concur, one cannot but be enraptured by the power of God that is especially found in Byzantine art.

PREVIOUS: The degeneration of words as weapons

NEXT: The basics of caring for our eyes at all ages