Shroud of Turin focus of talk at West Chester Parish 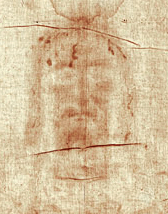 Could the Shroud of Turin be the actual burial shroud of Jesus?  Or is it nothing more than a medieval hoax? The film “Shroud Encounter” examines the clues to lead viewers deeper into the shroud’s maze of mystery.

Explore this profound enigma with Russ Breault, one of the world’s leading experts on the shroud, on Saturday, March 15 at 2:30 p.m. at SS Simon and Jude Church, West Chester. Admission is free, and a life-size replica of the shroud will also be on display at SS. Simon and Jude, located at 8 Cavanaugh Court in West Chester.

For hundreds of years this ancient linen cloth etched with the faint image of a crucified man has mystified millions. Nearly every scientific regimen has been employed to unravel the mystery and yet it remains unsolved.

Breault has captivated audiences coast to coast and has appeared in numerous documentaries about the shroud on such channels as the History Channel, Discovery and CBS.

PREVIOUS: Focolare offers reflection on passion and death of Jesus before Lent