Brookhaven parish is energized to evangelize in Lent 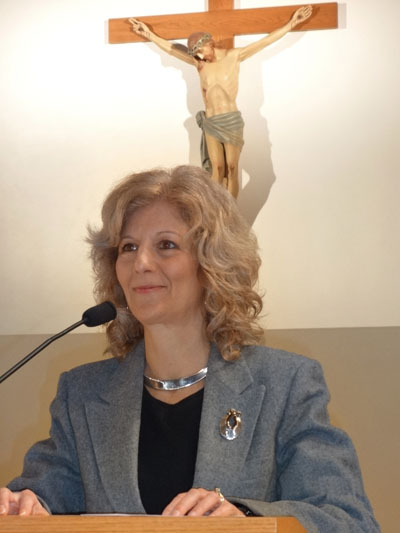 Gina Mesko speaks at Our Lady of Charity’s Masses last weekend, where she is the Brookhaven parish’s evangelization coordinator.

There were 1,159,966 Catholics registered in the parishes of the Philadelphia Archdiocese, according to 2012 October Count figures. Of that figure on a typical October weekend, 253,338 or 22 percent of them attended Mass.

As bad as that sounds, the figure represents people registered in a parish, not every Catholic living in the region. The best estimate of the total number of Catholics in the archdiocese including the non-registered, according to the latest Catholic Directory,  would be 1,455, 297. That takes the Mass attendance figure down to 15 percent.

Evangelizing among non-Catholics is commendable. The trick is, how do we get more of our birth Catholics back in the pews?

One method is by asking practicing Catholics to invite their non-practicing friends or relatives to come back to church and see what they are missing. Our Lady of Charity Parish in Brookhaven, Delaware County, has adopted a program designed by the Washington, D.C.-based Paulist National Catholic Evangelization Center, called “Catholics Reaching Out.”

The program had already been initiated in St. Norbert Parish in Paoli and Corpus Christi Parish in Lansdale when Gina Mesko heard about it. The evangelization coordinator at Our Lady of Charity learned about these efforts from Meghan Cokeley, director of the archdiocesan Office of the New Evangelization.

“The evangelization coordinator at St. Norbert’s, Peggy Kravitz, put together her own creative version of Catholics Reaching Out based on the Paulist materials and her own ideas,” Cokeley explained. “Randy Pagnotta, from Corpus Christi, also did his own version called ‘Bridging the Breach.’ I connected Gina with Peggy and Randy so she could hear from them the effectiveness of these outreaches, and then Gina, with the great zeal for evangelization that she has, moved forward!

“The Catholics Reaching Out Program is great because it provides materials and directions that can be used and distributed,” Cokeley said, “but there’s also room for a parish to add its own creative elements and make the program uniquely their own. This is really important since each parish is unique and brings its own particular gifts and resources to its evangelization outreach.”

Our Lady of Charity introduced the program last October and conducted it as an Advent program with modest success, but encouraging enough to reprise it during this coming Lent.

Groundwork for the Lenten program was laid on the weekend of Feb. 15-16, when Mesko spoke for approximately four minutes at each of the parish’s three weekend Masses.

Speaking of the Advent outreach, she said, “We are happy to report that as a result of this program a number of young adults and older adults came back to Jesus, to the Mass and to the sacraments, thanks to your efforts in allowing the Holy Spirit to work through you to warmly invite someone back.”

“Each of us sitting here today has someone in our lives who has a void, who hungers for true love, peace and joy and is likely looking for love in the wrong places,” she told the congregation.

At the Masses packets of material prepared by the Paulists were distributed to congregation. The first brochure was aimed at the worshipping congregation. “Many parishioners think that inviting inactive Catholics is the job of only a few people, like the pastor, the parish staff or evangelization team,” Mesko said. “Yet as baptized members of the Body of Christ, we all share in the responsibility of serving as disciples of Jesus in our families, our workplaces and our neighborhoods – wherever we go.”

A second brochure, “We Miss You,” which will be given to those who are to be invited back, covers various topics including “Growing Spiritually,” “Being Away,” “Catching  Up,” “Church Teachings,” “Divorce and Remarriage,” “The Joy of Forgiveness,” — and one  that has special resonance in the Church of Philadelphia in this generation: “The Hurts of the Past.”

“The church is made up of imperfect people on a journey to the fullness of the life in Christ,” it reads. “If you have been hurt by a church leader or member in any way, we seek your forgiveness. We believe that you can find healing through the sacraments and through the compassionate support of our faith community.”

Also in the packet is a letter of endorsement from Father Brian Izzo, pastor of Our Lady of Charity Parish.

“We want to make disciples and we want to invite you to be part of us,” he wrote. “The simple fact of faith is that Jesus Christ suffered and died for us, so that we could share in his life in heaven. Truly our hearts are restless until they rest in him.”

One of the key differences between the Catholic parish of today and the parish of a generation or so ago — when it was 15 percent who did not attend Mass — is that back in the day before television, universal automobile ownership, computers, a plethora of professional sports, and during an era of free parochial schools, the parish was literally the center of the people’s lives, with the secular complementing the sacred.

That has not entirely disappeared and the packet also included a list of the mostly non-religious parish events that contribute to parish spirit.

It’s probably no secret the average Catholic would rather undergo a root canal than confront someone they know personally face to face about their religious beliefs.

This is also covered. Included in the packet is a sample letter that can simply be mailed to the person or persons one wishes to invite to church.

That’s the invitation. The follow-up will be the Lenten Course itself, to be attended by the sponsors and their guests on five Monday evenings, beginning on March 17. That date is appropriate in a way, when one thinks about St. Patrick, one of the champion evangelizers of all time.

“Gina Mesko, with the active support of Father Izzo, has really been instrumental in bringing about a fire for the new evangelization at Our Lady of Charity,” Cokeley said. “I regularly hear from her about the new things they are doing there and Gina and her team show up to almost all the events we offer for evangelization. They are intent upon bringing about a transformation in their parish culture and so far, I’ve seen a lot of life in that direction.”