Sister dies at 89 after many years as nurse in hospitals, parishes 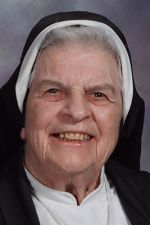 Franciscan Sister Regina Anne LaSorte, 89, died Saturday, Feb. 15 in Assisi House, Aston. She had been a professed member of the Sisters of St. Francis of Philadelphia for 67 years.

Born Jean Marie LaSorte in Toledo, Ohio, she entered the congregation in 1945 and professed her first vows in 1947. She earned her R.N. from St. Agnes Hospital in Philadelphia in 1950 and served primarily in health care as a nurse and in parish ministry.

Sister Regina Anne ministered for 36 years in the Archdiocese of Philadelphia, including at St. Agnes Hospital and St. Mary Hospital. From 1989 to 1991 she worked at Our Lady of Angels Convent in Aston. She moved to Assisi House in 2006 and served in prayer ministry until her death.

Sister Regina Anne ministered for 14 years in the Diocese of Trenton, the Diocese of Harrisburg and the Diocese of Wilmington. She also served two years at St. Mary’s Home of Children in New Bedford, Mass.; and one year at St. Joseph Hospital in Reading, Pa.

All services will be held in Assisi House, 610 Red Hill Road in Aston on Wednesday, Feb. 19. A wake service will be held at 9:30 a.m. followed by a viewing, and the funeral will be celebrated at 11 a.m. Burial will follow in Our Lady of Angels Cemetery in Aston.

Sister Regina Anne is survived by nieces and nephews, and by her Franciscan family. Donations in her name can be made to the Sisters of St. Francis Foundation, 609 S. Convent Road, Aston, PA 19014.