In basketball championships, Neumann Goretti boys and girls win it all 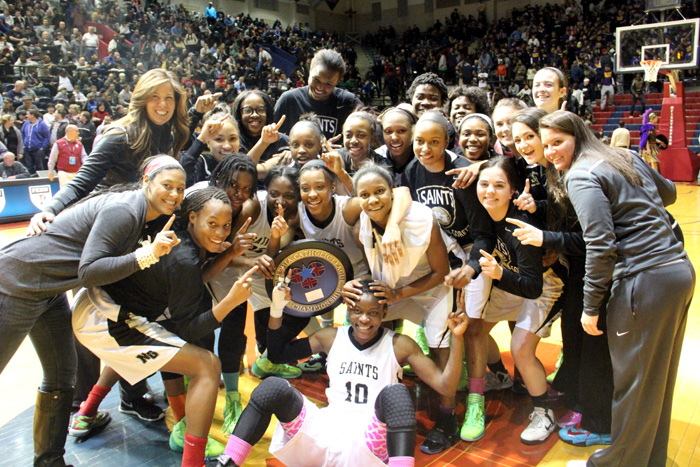 Neumann Goretti is the king of the Catholic League.

And the queen as well.

In a riveting championship doubleheader Monday night at the Palestra, the Neumann Goretti girls outlasted Archbishop Wood, 55-46, for their first Catholic League title since 1978. About three hours later, the N-G boys stopped Roman Catholic, 53-48, to capture their sixth consecutive crown.

This is the first time in 46 seasons that the same Catholic League school won both basketball titles in the same season; Cardinal O’Hara pulled the rare trick in 1968.

(See a photo gallery of the games here, and watch a video here.)

“We preach family, and this was a family victory,” said N-G girls coach Letty Santarelli. “Everyone contributed to this.”

No one more than Alisha Kebbe, who nailed three three-pointers and finished with 17 points. Along with dynamic point guard Ciani Cryor (12 points) and forward/center Ella Awabajo (10 points), N-G raced to a 21-11 lead after the first quarter before the Vikings (20-3 overall) regained their footing.

With sophomore Bailey Greenburg and senior Rachel Day both reaching double digits with 17 and 12 points, respectively, the Vikings climbed to within 41-39 with 26 seconds left in the third quarter and then 44-43 with 6:22 remaining in regulation.

But the undefeated Saints (24-0) clamped down on defense the rest of the way.

“I don’t rank them because they’re all special,” Arrigale said. “You look around and see a lot of players from the past. It’s a great thing.”

Look for more coverage of the league championships later this week.

PREVIOUS: Week of Catholic League basketball leads up to finals

NEXT: At Neumann-Goretti, good people make a good thing happen