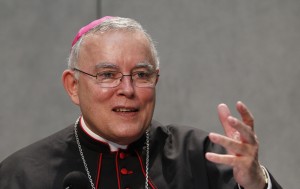 Archbishop Charles J. Chaput of Philadelphia speaks during a press conference with a delegation from Pennsylvania at the Vatican March 25. (CNS photo/Paul Haring)

VATICAN CITY (CNS) — Archbishop Charles J. Chaput of Philadelphia underscored the urgency of removing the contraception mandate from the U.S. health care law, said he looked forward to more debate about church practice on marriage, and credited Pope Francis with teaching Catholics that they must preach the Gospel before attempting to transmit the church’s moral teachings.

The Obama administration currently requires that nearly all health insurance plans, including those offered by most Catholic universities and agencies, cover sterilizations, contraceptives and some abortion-inducing drugs, all of which are forbidden by the church’s moral teaching. The U.S. bishops have strenuously opposed the mandate and rejected existing exemptions as inadequate.

“I don’t think there’s a more important political issue in the country than this,” the archbishop said. “Religious freedom is foundational to our identity as a country and to our ability as a church to respond appropriately to the needs of the broader society.”

Archbishop Chaput was at the Vatican to help plan the World Meeting of Families that will take place in Philadelphia in September 2015.

The meeting, which the archbishop said he hoped Pope Francis will attend, will come between two synods of bishops on the family, to take place at the Vatican this October and October 2015. Both synods are to consider the situation of divorced and civilly remarried Catholics who have not received annulments of their first, sacramental marriages, and who are thus ineligible to receive Communion. The pope has said their predicament exemplifies a general need for mercy in the church today.

Some bishops, particularly in Germany, have proposed changing church practice in certain cases to allow such Catholics to receive Communion.

Archbishop Chaput, who said he expected that question to be one of many addressed in Philadelphia, said he was “not open to changing the teachings of Christ” but “very curious about the debate.”

“People who choose a state that’s contrary to the teachings of Jesus are required, to be in union with the church and Jesus, to rectify that situation,” he said. “Communion means in the union of heart and mind and action, and so that is required for holy Communion.”

“I’m anxious to hear why, for example, the German bishops stand where they do and see that as in keeping with the teachings and to hear the response of the rest of the church to that position.”

The archbishop said “it really will be very important to hear what bishops from Africa and Asia say, as well as bishops from the North and the West.”

“I’m anxious to see how this issue is resolved,” he said, “and when it is resolved, I hope the whole church can get behind it and we won’t have people continuing practices or starting practices that are contrary to the direction of the Holy See.”

Archbishop Chaput said he had solicited responses from laypeople to the Vatican’s preparatory questionnaire for the 2014 synod, which asked about the promotion and acceptance of Catholic teachings on controversial topics, including premarital cohabitation, same-sex unions and contraception. But he said that, unlike some other U.S. dioceses and bishops’ conferences in other countries, the archdiocese would not publish the results, in compliance with instructions from the Vatican.

Asked to update his assessment, in a July 2013 interview, that the “right wing of the church … have not been really happy” about the election of Pope Francis, Archbishop Chaput said, “I think that the pope is widely embraced by all dimensions of church life.”

“I know there are super-traditional Catholics who are concerned that his interests aren’t their interests, but I’d say overall most people support him and are grateful for the direction he’s giving us,” he said.

The archbishop said there was a misperception that Pope Francis had decided to downplay church teaching on sexual and medical ethics, based on an interview published last September, in which the pope said “it is not necessary to talk about these issues all the time.”

“He didn’t tell us to stop talking about abortion and the meaning of marriage,” Archbishop Chaput said. “He just says that shouldn’t be the only thing we talk about, and we ought to make sure that when we do that, we’ve evangelized the people before we overwhelm them with one issue as the primary identity of what it means to be a Catholic.”

“There’s no way to irritate someone more than if they’re not evangelized and you try to catechize them,” he said. “Because they have no motivation at all to accept the teachings of Jesus Christ unless they believe he’s Lord.”