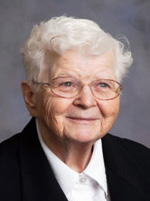 Sister Barbara Ann Tickner, I.H.M., died Feb. 26 in Camilla Hall, Immaculata, in the 59th year of her religious life. She was 78 years old.

Born in Philadelphia, Sister Barbara entered the Congregation of the Sisters, Servants of the Immaculate Heart of Mary in 1954 from Holy Family Parish, Manayunk, and professed her vows in 1955.

She taught eighth grade in various schools in Philadelphia, Bridgeport and her beloved Chester. She taught for seven years in Blessed Katharine Drexel School and then served 12 years at St. Katherine Drexel Parish Evangelization Program and Social Outreach. She served the African-American community for many years.

She entered Camilla Hall in 2002 and commuted from her residence in Camilla to Chester.

It was most evident at her funeral that the people of Chester were grateful for her love, concern and help she gave to many people in various ways.

Sister Barbara is survived by members of her religious community, her I.H.M. special friends and her Sister Kathleen Tickner. She is predeceased by her parents Francis and Alice and her Sister Marie Tickner.