Sister who taught at St. Vincent Homes, Tacony, dies at 93 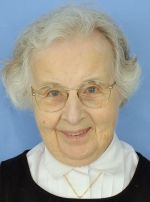 Sister Dolores Baumgartner, S.S.N.D., who served more than 20 years in the Baltimore area before being assigned to St. Vincent Homes in the Tacony section of Philadelphia, where she ministered for another two decades, died of a heart attack on Feb. 27 at Maria Health Care Center in Baltimore.

She was 93 years old and had been a professed member of the School Sisters of Notre Dame for 74 years.

Dolores Julia Baumgartner was born May 25, 1920 in Philadelphia, the youngest of four children of Frances (Reischmann) and Bernard Baumgartner. She graduated from St. Boniface School in North Philadelphia.

In 1936 she entered the School Sisters of Notre Dame in Baltimore and two years later graduated from the Institute of Notre Dame. As a novice she was given the religious name Mary Berlindis, and she professed her first vows as an SSND in 1939. She professed her final vows in 1945. She later resumed use of her baptismal name Dolores.

After teaching for many years in Baltimore Catholic schools, in 1961 she became director of initial formation for the SSND candidates in the Baltimore Province, a position she held until 1968.

In 1977 Sister Dolores returned to her home city of Philadelphia and for the next 21 years served in ministry at St. Vincent Homes in Tacony. After starting there as a child care worker, she became kindergarten teacher, principal and program director of extended day care. In the later years at St. Vincent’s she served as a teacher’s aide and receptionist.

In 1998 Sister Dolores moved to Villa Assumpta in Baltimore and spent several years volunteering in community service to the sisters in the adjoining health care center. In 2011, she moved to Maria Health Care Center.

Sister Dolores is a 1956 graduate Seton Hall University in New Jersey, where she earned a bachelor’s degree in elementary education.

Through the many years, she remained very close to her older brother, the Rev. Bernard J. Baumgartner, a Redemptorist priest who served parishes in Baltimore, Annapolis and Philadelphia for more than 30 years before his death in 2006. Sister Dolores is survived by several nieces and nephews.

Sister Dolores’ funeral Mass was celebrated March 6 in the Chapel at Villa Assumpta. Burial was in Villa Maria Cemetery in Glen Arm, Md.