In Argentine shanties, priests live like the sheep they shepherd 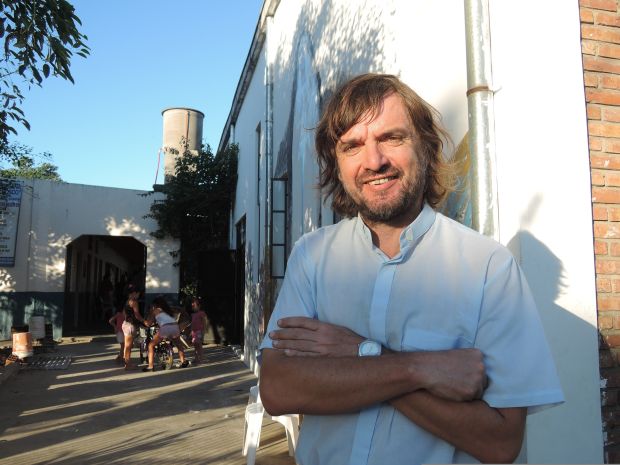 JOSE LEON SUAREZ, Argentina (CNS) — The doors used to stay shuttered on Our Lady of the Miracle chapel in a shantytown on the outskirts of Buenos Aires, opening only on Saturdays for catechism classes and Sundays for a single, sparsely attended service.

Nowadays, the chapel opens early and stays late, offering everything from a safe place for kids to play soccer to packed Sunday services. It also provides a community center and spiritual home for often-stigmatized shanty dwellers, whose neighborhoods are known as “Las Villas de Miseria,” or “Misery Villages.”

“It embarrassed me to go to church,” said Sebastiana Solabarrieta, who volunteers in the chapel’s Caritas clothing bank. “Now, everyone is here.”

Churchgoers like Solabarrieta credit Father Jose Maria di Paola, pastor at the chapel, with bringing people back to Catholicism over the past year in Villa La Carcova, where evangelical groups had gained ground and problems like poverty and drugs persist.

But Father di Paola — famous in Buenos Aires as “Padre Pepe” for his work with the downtrodden and drug addicts — and his fellow “curas villeros” (shanty priests) provide an example of the “poor church” of which Pope Francis speaks, in which priests leave their parishes to provide pastoral attention to people on the periphery.

The priests have become an institution in metropolitan Buenos Aires, where former Cardinal Jorge Bergoglio made them his foot soldiers in implementing his vision of a church serving society and priests being “shepherds living with the smell of sheep.”

Father di Paola identifies with the pope’s description of pastors being close to the people: He, like others in the area, lives in a wooden home with no water.

“Previously, those working in the villas came from outside. You were in a parish and you would go to the nearby villas for a visit. Now, we live in the villas,” said Father di Paola.

“The reality is that you share experiences with the people like just another neighbor. You do all the church’s work from inside the barrio, not from the outside.”

He attributes his closeness to the community as the reason for renewal at Our Lady of the Miracle, where, during a recent visit, youth goofed off while waiting for their group to gather, catechism instructors sipped mate and lawyers from nearby Buenos Aires offered pro bono legal advice.

“This to me was …” said Angelica Benitez, who gestured, unable to express her amazement that a priest would live in a house like hers, but without steel security bars.

“People have been coming back to church” — including, Ledesma insisted, evangelicals — “since Pope Francis was elected and because of the priest. … We can’t forget Pepe’s part.”

Priests have been in the villas since the first shanties were formed by people from the provinces seeking opportunities in the capital, although they weren’t always well seen by the government, in part because their presence was seen as legitimizing squatters’ activities. In 1974 Father Carlos Mugica, whom Father di Paola considers an inspiration, was murdered, presumably by an anti-communist group, after celebrating Mass.

Pope Francis acted out of genuine concern for the poor, although the presence of priests in the villas has achieved other objectives, such as slowing the growth of evangelical groups, Father di Paola said.

“He thinks that in the mouths of the poor, you’ll find the Gospel,” Father di Paola said of the pope. “He doesn’t see the poor person as someone who only has to be helped, but someone who can teach you a lot.”

But the pope also had political reasons for putting his priests in the villas. He often clashed with a federal government promoting populist programs to the poor, but whose ministers lived lavishly.

“It was political message to the government: I have my best priests living with the poor. Your ministers live in Puerto Madero,” a wealthy Buenos Aires neighborhood, said Jose Maria Poirier, publisher of Criterio magazine.

Priests in the villas seem stunned by the attention they’re receiving; Father di Paola is a minor media sensation in Buenos Aires.

“It amazes the world that we live in poor places,” said Father Juan Issamendi of Our Lady of Caacupe Parish, named for the patroness of Paraguay.

“The poor have a lot of faith. It’s beautiful as a pastor to experience,” he said.

The priests in the villas have their parishes, but expand their outreach by opening chapels in as many areas as possible. Many of the chapels are named for patronesses of neighboring countries, and priests adjust their practices as villa residents often arrive in Buenos Aires from places such as Bolivia, Paraguay and Peru.

“Villa residents are often immigrants. (They) find their identities in keeping the cultures of their places of origin,” said Father Carlos “Charly” Olivero, also a priest at Our Lady of Caacupe Parish.

“That culture … is Catholic, which turns them toward the church,” he said.

Priests also address local problems by running addiction and accompaniment programs and organizing everything from English lessons to food and clothing banks.

The villeros’ model is based in faith, but it makes both spiritual and material improvements in people’s lives, Father di Paola said, explaining why it has had some staying power.

“We showed that religion isn’t the opium of the people,” he said. “It’s a way to transform society.”

PREVIOUS: 2012-2013 Audited Financial Statements of the Archdiocese of Philadelphia

NEXT: Mass for healing of sexual abuse victims