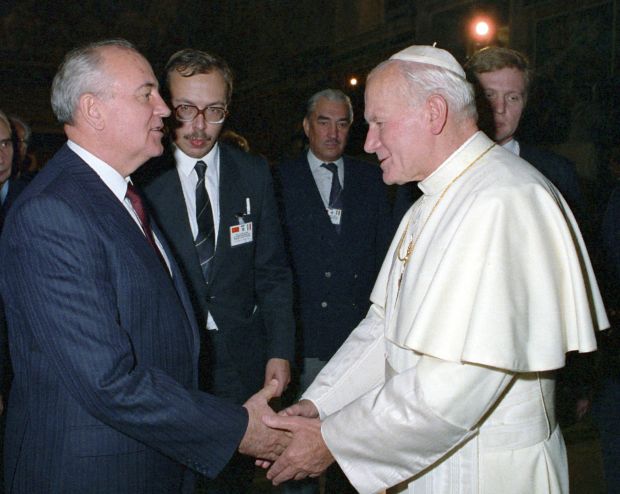 VATICAN CITY (CNS) — Catholics venerate Blessed John Paul II for his holiness, as demonstrated, among other ways, by his globetrotting evangelism and long-suffering endurance in the papacy despite his illness.

For secular historians, however, none of the late pope’s accomplishments looms larger than his role in the end of the Cold War and the fall of Soviet communism.

Blessed John Paul’s opposition to totalitarianism grew out of his devotion to the idea of God-given human rights. As a father of the Second Vatican Council, then-Archbishop Karol Wojtyla of Krakow was a key supporter of the 1965 Declaration on Religious Freedom, “Dignitatis Humanae,” which affirmed that the “right to religious freedom has its foundation in the very dignity of the human person, as this dignity is known through the revealed word of God and by reason itself.”

During the 1970s, a period of increasing ferment in Poland marked by major strikes to protest the communist government’s economic failures, then-Cardinal Wojtyla became a well-known champion of human rights for all Poles.

“It cannot happen that one group of men, one social group — however well-deserving — should impose on the whole people an ideology, an opinion contrary to the will of the majority,” he said in a 1976 homily.

After his 1978 election to the papacy, Blessed John Paul modified Pope Paul VI’s policy of “Ostpolitik,” whereby the Vatican sought to foster better relations with Soviet-bloc countries in the hope of improving conditions for Catholic churches there. The new pope kept open the channels of dialogue, while pressing communist regimes to comply with international agreements on human rights.

In June 1979, less than nine months after becoming pope, Blessed John Paul visited his native land, where he spoke to crowds totaling 13 million and publicly called for “political self-determination for (Poland’s) citizens and formation of its own culture and civilization.”

The next year, nationwide strikes forced the Polish government to raise wages, loosen censorship and permit the formation of an independent labor union, Solidarity. Blessed John Paul was a major inspiration for this nonviolent movement. Lech Walesa, a Solidarity leader and later president of Poland, signed the accords ending those strikes with a pen bearing the pope’s picture.

The alarm of Polish officials and Soviet leaders at the pope’s influence in that period has been well-documented in books published since the end of the Cold War. When a Turkish gunman nearly succeeding in killing Blessed John Paul in May 1981, many observers suspected a Soviet connection. That link has never been proven, but Cardinal Stanislaw Dziwisz, the late pope’s secretary, wrote in 2007 that Blessed John Paul himself believed Moscow was behind the assassination attempt.

“Don’t all roads, however disparate they are, lead to the KGB?” Cardinal Dziwisz wrote.

Blessed John Paul’s second visit to Poland, in June 1983, came after the Polish government imposed martial law to suppress the democracy movement. The pope met with Gen. Wojciech Jaruzelski and called on other countries to lift economic sanctions against the military regime. But he also publicly championed independent “trade unions as a mouthpiece for the struggle for social justice” and insisted on meeting with Walesa, who was still in custody. Martial law was lifted the next month.

Over the following years, the pope continued to encourage the democracy movement with weekly radio addresses in Polish. In 1989, against a background of liberalizing moves by Soviet leader Mikhail Gorbachev, the Polish government agreed to hold round-table negotiations with representatives of Solidarity and the Catholic Church. Walesa later wrote that the idea for the negotiations came from Blessed John Paul.

As a result of those talks, elections in June 1989 led to the formation of a new Polish government led by a noncommunist prime minister. Within a few months, the Berlin Wall was down and communist regimes had fallen in Czechoslovakia and Romania. The drive for independence by other Soviet bloc states and Soviet republics finally led to the end of the USSR in 1991.

“Everything that happened in Eastern Europe in these last years,” Gorbachev wrote in 1992, “would have been impossible without the presence of this pope and without the important role — including the political role — that he played on the world stage.”

NEXT: Many of today’s papal ‘traditions’ were Blessed John Paul’s innovations