Catholic young adults discuss love of faith, desire to ‘share it with others’ 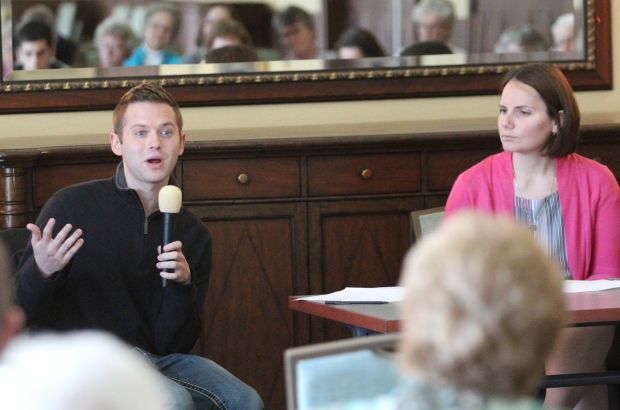 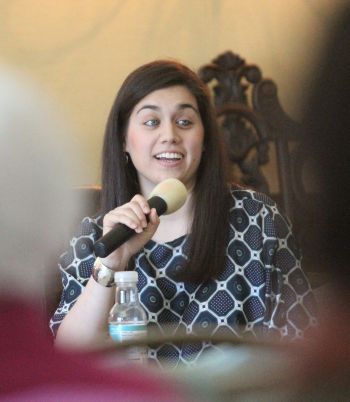 Lori Boccuzzi speaks about her faith journey and the challenge of engaging Millennial Catholics through new technology.

Catholic young adults had a forum to discuss what they see as the significant issues within the church April 6 at Chestnut Hill College.

The college’s Institute for Forgiveness and Reconciliation held the “Conversation that Matters: Young Adult Catholics Address the Church that They Love,” featuring a panel made up of three young people, all graduates of the college on the western edge of Philadelphia.

The panel consisted of Lori Boccuzzi, director of Pathways to Success in College at Cristo Rey Philadelphia Catholic High School; Michelle Lesher, who joined the Sisters of St. Joseph of Philadelphia, the order of religious sisters that sponsors the college and who remained there to teach and now works as the assistant director of campus ministry; and Seth Jacobson, a  doctoral candidate studying educational leadership and policy at Drexel University.

They shared their personal experiences growing up in different environments but all ended up at the same place: the Catholic Church.

Boccuzzi said that as an Italian-American Catholic, “My faith came from my family. I always felt loved by God.”

She recalled how a book of daily poems included one on her birthday that always stuck with her.
“(It was) called ‘Two Giant Fat People,’” she said, and recited a line from the poem: “‘God and I have become like two giant fat people living in a tiny boat. We keep bumping into each other and laughing.’”

Lesher spoke of her growing up in a “beautiful parish faith community and a girl’s Catholic high school” where she participated in the Community Service Corps (CSC), an organization which enables teens to put their faith into action through service opportunities.

“At the end of every Mass, Father would say something that always stood out to me: ‘The Mass never ends but must be lived. Let us go forth and serve our brothers and sisters,’” Lesher said. 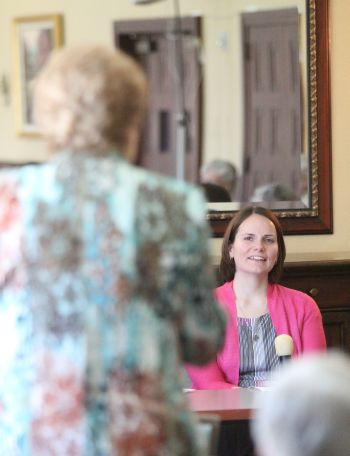 Panelist Michelle Lesher listens to a question from an audience member during the discussion.

In contrast, Jacobson elaborated on his non-religious childhood in Philadelphia.

“It was clear to us kids,” he said, “that the church was something oppressive and stagnant. I knew that I was gay but I was scared of what God would feel even though I didn’t really understand what God was then. I did not address my problems and it became overwhelming.

“I hit rock bottom but felt that there’s nowhere to go but up from here,” Jacobson said, “And so I became more accepting of myself and wanted to help others who found themselves in such a struggle as I had found myself.”

At Chestnut Hill Jacobson began to become interested in the Catholic Church more seriously. “Who is this Jesus person?” he said. “I started to ask questions and become engaged in campus ministry.”

At one retreat, “I had a conversion experience,” he said. “Someone read the ‘Footprints in the Sand’ story. I thought about my childhood and suddenly saw God as the one who was holding me afloat. It was a powerful experience. I wanted to share it with others.”

The conversation then turned into discussion among the 30 guests about evangelization and how younger generations are using technology.

“The Millennials live in a very real but virtual community,” she said. “It feels like the real world, but it’s fake. They are denying their authentic self.

“Engaging them is a new challenge,” Boccuzzi continued. “We have to think outside the box and share in a way that’s relevant to them. When they ask, ‘Is my authentic self enough to be part of this community?’ the answer is yes.”

Lesher touched upon the issue of exclusivity in the church and the debate over roles of men and women. “How do we (the church) pass along our faith in a way that is significant, meaningful and makes sense?” she asked. “The young adult ministry is not as vibrant as it could and should be.” 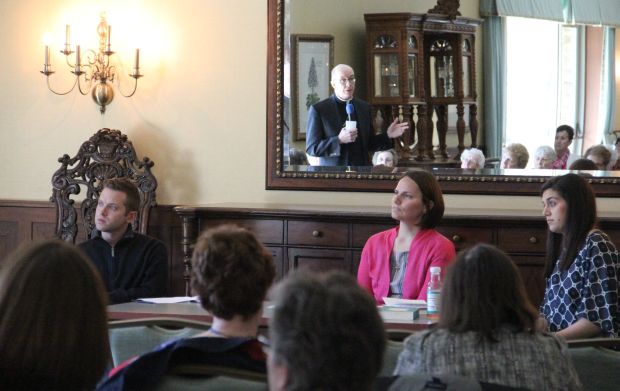 Jacobson said he started a young adult Catholic community and at its meetings, “we had an open dialogue about the church, where we could celebrate it and critique it where it needed to be.

“It was a call to their authentic selves,” he said. “Hearing that ‘God loves you’ is powerful for the young adults when it comes from the leadership of the church.”

After the panel dialogue closed audience members posed questions and made comments.

In attendance were many Sisters of St. Joseph and Chestnut Hill College leaders, as well as Bishop Timothy C. Senior, rector of St. Charles Borromeo Seminary.

Sister Catherine Nerney, S.S.J., director of the institute and organizer of the event, said the idea for the event came from Pope Francis. “The church is not meant to become complacent and settle into an unchallenged and unchallenging routine,” she said. “Young Catholics’ passion and concerns have fueled my own. I so want to give more people a chance to hear them, experience their goodness and ponder their questions.”

She said no previous Chestnut Hill speaker forums had so focused on the issues of young people. “We are open to promote conversations on any significant topic pertaining to the life and mission of the church and the well-being of our society as the ‘world that God so loves,’” she said, referencing the Gospel of John, 3:16.

“The environment we hope to nurture is one of mutual respect, honesty and our expanding capacity to hold differences with love as we, a pilgrim people, journey closer to God’s truth, together.”