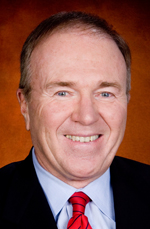 He will succeed Brother Michael J. McGinniss, F.S.C., who last year announced his intention to step down at the end of his term on May 31, 2014, after 15 years as president.

The chair of La Salle’s Board of Trustees, William R. Sautter, called Gallagher “an extremely respected, seasoned president and accomplished academic leader who is ideally suited to maximize La Salle’s potential during this interim period.”

In addition to his duties as interim president, Gallagher will help search for a new president of the university, Sautter said.

“I look forward to providing the best leadership possible to the La Salle community and to participating in the life of the university,” Gallagher said.

He more than quadrupled the university’s applications for admission, expanded its academic offerings, constructed state-of-the-art facilities, significantly increased its endowment and raised its national and international profile. Under his leadership, the university grew to include six schools offering more than 50 undergraduate and graduate degree programs.

By the time Gallagher left Philadelphia University in 2007, more than half of all students enrolled in the school were majoring in programs that had not existed 15 years earlier.

During his career, Gallagher played a key role in the state’s educational system, holding a number of high-level appointments. He is a former chair of the Pennsylvania Board of Education, a position he held for nearly a decade, and a former Commissioner of Higher Education for the Commonwealth of Pennsylvania. He also served as a member of the Philadelphia School Reform Commission for several years and is a former trustee of The American University of Rome.

Gallagher has also served as interim president of Arcadia University in 2011.

He was president of Mount Aloysius College in Cresson, Pa., from 1977 to 1981, where he was the first lay leader in the school’s history. Previously, he served in senior administrative roles at The American College in Bryn Mawr, St. Joseph’s University in Philadelphia and Georgetown University in Washington, D.C.

Gallagher has served numerous civic and educational organizations including the Greater Philadelphia Chamber of Commerce and the Association of Independent College and University Presidents of Pennsylvania (AICUP). He has served as a member of the Connelly Foundation Board of Directors since 2007.

He holds a Ph.D. in higher education from The Catholic University of America and completed post-doctoral studies at Yale University’s School of Management and the Institute for Educational Management at Harvard University. He earned a Bachelor of Science degree from St. Francis College and a Master of Education from Duquesne University.

La Salle University was established in 1863 through the legacy of St. John Baptist de La Salle and the Christian Brothers teaching order, which St. La Salle founded in 1680. La Salle is an educational community known for its academic excellence, practical teaching and devotion to students and is shaped by traditional Catholic and Lasallian values.