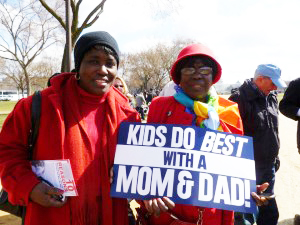 What is billed as the “Marriage March” in the style of the annual march for life in Washington, D.C., each January will come to the nation’s capitol in June to support traditional marriage through public witness.

The Archdiocese of Philadelphia will send a contingent, and Catholics are invited to board buses or other transportation for the June 19 event.

Archbishop Charles Chaput asked priests of the archdiocese to promote the effort in their parishes with a letter he sent May 2.

Recognizing that the march comes at a busy time of year for families, the archbishop said Catholics nonetheless “should avail ourselves of the opportunities, whenever we can, to witness to the truth about God’s plan for marriage,” he wrote.

The planned events of the march are similar to the March for Life and include a rally near the U.S. Capitol followed by a march of all participants to the Supreme Court building, spanning from 10:30 a.m. to 2 p.m. on June 19.

(See the complete schedule and learn about the march speakers here.)

Buses will depart from each of the five counties of the archdiocese under the coordination of local captains. The locations of the buses’ departure and contact information for the captains includes:

The march is important, Archbishop Chaput wrote in his letter to priests, because of recent attempts to redefine marriage legally as other than the church’s understanding of marriage as “a unique relationship with a unique definition” and a “faithful covenant between one man and one woman for life.”

Marriage is “ordered not only to companionship and mutual support, but also — and even more fundamentally — to the procreation and education of children,” Archbishop Chaput wrote. “This is why every child deserves a family where the father loves the mother, and the mother loves the father.

“For anyone to attempt to redefine marriage or the family as something else undermines that goal. Thus it’s vital that the Church keep working to defend the integrity of marriage.”

PREVIOUS: Living diversity: How to welcome equals, not just guests