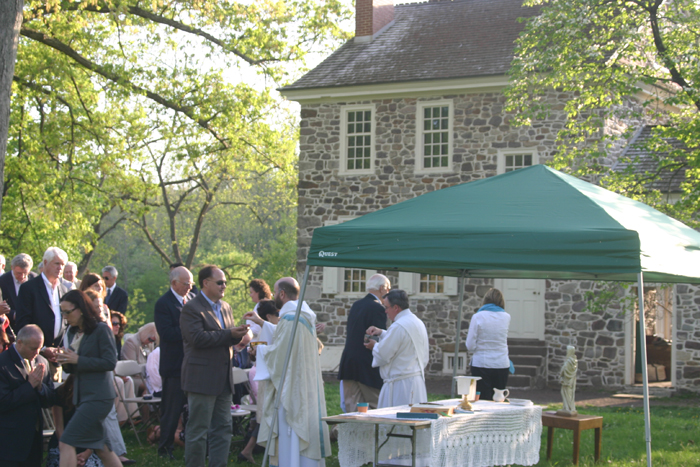 Members of Legatus take part in an outdoor Mass May 13 at General Washington's headquarters in Valley Forge National Historical Park. the Mass was celebrated by Father John B. Gabage (distributing Communion at center) and Deacon Alvin Clay (right). (Photos by Matthew Gambino) 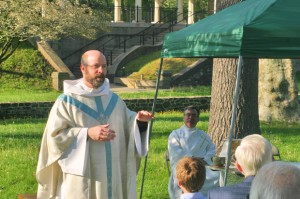 Father John Gabage of the Diocese of Wilmington preaches the homily.

The unusual occasion of an outdoor Mass in the Philadelphia Archdiocese last week became even rarer because of its location in Valley Forge National Historical Park.

Legatus, the association of Catholic businessmen and their wives, sponsored the May 13 Mass on the feast day of Our Lady of Fatima outside the headquarters of General George Washington.

Father John B. Gabage, a priest of the Wilmington Diocese, celebrated the Mass for about 40 people assisted by Deacon Alvin Clay, an archdiocesan deacon and Legatus member.

Under the early evening sun that illuminated Washington’s Revolutionary War headquarters and bathed the green rolling landscape in golden light, Father Gabage in his homily said the bright yellow buttercups that covered the lawn were of the color that symbolizes freedom and peace. 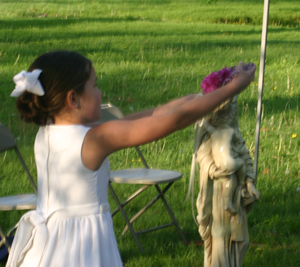 Isabella Mason places a crown of flowers on a statue of Mary. The May 13 Mass was celebrated on the feast of Our Lady of Fatima.

“We’re here as American citizens,” he said. “We’re also here as citizens of heaven, as Americans called by duty to promote the kingdom of God.”

Speaking at the site of the Continental Army’s 1777-78 encampment, Father Gabage said that promoting peace “begins at home and goes out to the community, to the state, to the nation, to the world and to heaven.”

He reminded the Legatus members of their “duty to promote Catholic identity in the workplace and to honor Mary all the days of your life.”

At the conclusion of Mass the congregation sang a hymn to Mary as Andrew and Isabella Mason, young children of Legatus member Drew Mason, placed a crown of flowers on a statue of Mary near the makeshift altar. 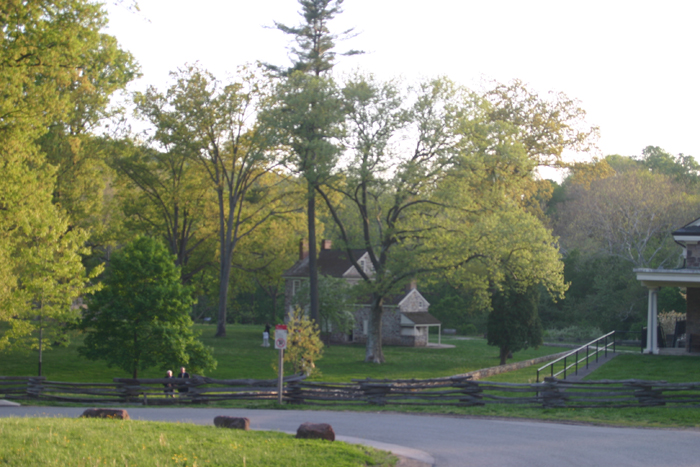 NEXT: Ruling to allow same-sex marriage will not be appealed