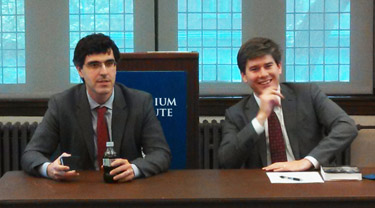 Dr. Jesus Fernandez-Villaverde (left), an economics professor at the University of Pennsylvania, and Dr. Matthew O’Brien, an equity research analyst, were the speakers at the Collegium Institute’s May 23 seminar on the Penn campus. (Matthew Gambino)

The framework for building a more just economic order for the world, with the help of Catholic social teaching, might have begun to be constructed at the University of Pennsylvania on Friday, May 23.

The Collegium Institute for Catholic Thought and Culture held a lunchtime program focused on Catholic social thought, economics and social justice. The year-old institute is, according to its mission statement, an independent scholarly foundation devoted to fostering the Catholic intellectual tradition at Penn.

(Learn more about the institute here, and read Archbishop Charles Chaput’s recent column about it here.)

The forum plugged into the tenured minds of current economic research thinkers Dr. Jesus Fernandez-Villaverde, senior fellow of the institute and professor of economics at Penn, and Dr. Matthew O’Brien, chairman of the institute’s board and a philosophy teacher before becoming an equity research analyst.

The approximately 25 participants and other guests gathered to listen and take part in a conversation focused on modern Catholic social thought and the writings of Pope Francis regarding economics and social justice, especially last year’s “The Joy of the Gospel,” as well as the books “Compendium of Social Catholic Doctrine” and “Papal Economics.”

“The two complementary principles that bind people together are charity, or love, and justice,” said O’Brien. “Both must go together. Without justice, you cannot understand charity.”

History often fragments charity and justice, he said, “but as Pope Francis has stated, in a globalized world we must affirm that social life be animated by the twin principles which order our life together.”

O’Brien pointed out how Catholic social teaching defines inequality among people, including how the differentiation of labor can lead to a global economy of exclusion. “Using a segment as a sacrifice for others,” he said, “contradicts the holistic and common good of economics.”

The anxiety of many people who believe they are being excluded from the benefits of the global economy can lead to bitter feelings and anger, according to Fernandez-Villaverde. “There is a sort of a winter of discontent among Americans, and a lot of room for improvement,” he said.

Regarding the Pope Francis’ critique of the economy, O’Brien underscored what he called “a Francis of perception and a Francis of reality,” he said. “There is a narrative out there that the left wing pope is in charge … but Francis is actually saying what Benedict did. If people read the exhortation (“The Joy of the Gospel”), maybe it would have some impact.”

Fernandez-Villaverde talked at length about education, its increasing necessity for enjoying the benefits of the economy and the need for adaptability in students: “The classics are still important,” he said. “We focus on mathematics because it is something we can measure … but balanced education adds in the classics.

“Many people are disengaged with 25 centuries of history,” he continued, “so much so that students and teachers don’t know what natural law is, they don’t understand that there is a natural order, the natural rights of man. They cannot even read the Declaration of Independence or the Constitution.”

In order to change this status quo, Fernandez-Villaverde suggested incorporating all skills and fields in education. “All skills are complementary,” he said. “True education should have all the complementary skills together … to think about the future, you have to understand history.”

“In a world where technology changes faster than ever,” the professor continued, “the basics are more important than ever. Teach the basic fundamentals and (people) are able to learn anything. If they have enough analytical basics, I can teach them anything.”

The conversation regarding investments and income economics held many a hot-button topic, and the questions from the audience focused on nostalgic traditions from the past competing with current trends and future hopes.

“Focusing solely on income issues distracts from other issues,” O’Brien responded. “Human action and behavior is presumed. Economic and financial policies (currently) are fundamentally manipulative. (Institutions) are not engaging individuals who can then respond and build on that.

“Ownership and responsibility,” he continued, “through investing and index investing, is it in violation of Catholic social teaching? It’s the kind of “On the Waterfront” discussion,” he said, referring to the movie depicting a mid-20th century Catholic understanding of the role of labor unions, the role of capital and the responsibilities of economic and social systems to the individual.

One of the questioners brought up an interesting metaphor: “There is a kind of instinct against (Congressman) Paul Ryan. Like an “Invasion of the Body Snatchers” reaction because he is using a new model which is different from the preferred model programmed in Catholic social thinking.”

Fernandez-Villaverde appeared to agree, saying “the product of thinkers interpreting Catholic social teaching are from a particular experience in a particular time in history. There are a lot of attachments there.”

The discussion also touched upon issues such as the movement regarding pro-market thinkers versus pro-business thinkers. Fernandez-Villaverde used the example of computer software to frame the debate. Open-source software is developed by programmers to be shared and improved upon by all users on the Internet, while software giant Microsoft Corp., for example, tries to patent software as its intellectual property.

“For a market economy to succeed, it is important for people to agree it’s fair, and not crony capitalism,” he said. He added that when a business, legitimately or not, is accused of “twisting the system to protect its intellectual property rights, people become unhappy,” and they may “misdirect their anger” toward Congress seeking legislative solutions.

He pointed toward the online, volunteer-driven, free encyclopedia Wikipedia as “an example of subsidiarity” that is “better than anything centrally planned.” That principle of smaller, locally oriented organizations doing as much as possible is firmly rooted in Catholic social thought.

“Because we believe in markets doesn’t mean we believe in corporations,” Fernandez-Villaverde said. “We’re pro-markets, not pro-business.”

As the intellectual symposium came to a close, discussions continued to buzz like electricity in the air around the Ben Franklin Room on the Penn campus.

***
Marimah Branch is a freelance writer in North Wales.

NEXT: Catholic high schools gear up for week of graduation exercises, Masses