Priests of archdiocese gather for friendship and prayer 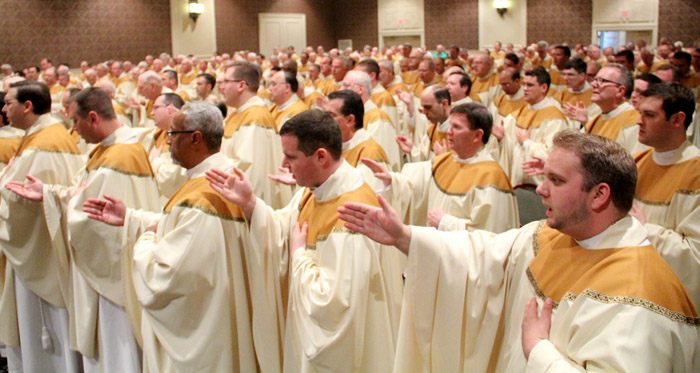 Newly ordained priests (from right) Fathers David Waters and Charles Ravert join other priests including Msgr. Federico Britto (center) in concelebrating Mass at the Convocation of Priests May 21-23 at the Hershey Lodge. (Photos by Sarah Webb) 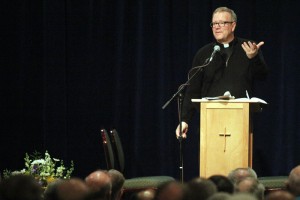 Hundreds of priests of the Archdiocese of Philadelphia took a break from their parishes and traveled to Hershey, Pa., for three days last week to be revitalized in their ministry.

Their guide through the Convocation of Priests held May 21-23 was one of America’s most sought-after Catholic speakers and perhaps the most popular communicator of Catholic teaching and culture, Father Robert Barron.

(See a photo gallery here, and watch a video here.)

The presenter for the successful video series “Catholicism” and rector of the Chicago Archdiocese’s Mundelein Seminary, Father Barron wove his frequent talks to the estimated 320 assembled priests into the theme of the convocation: “Priest, Prophet and King: Reviving Pride in our Priesthood.”

Archbishop Charles Chaput spoke to priests during the convocation, especially during a closed-door dialogue session, and prayed and dined with them throughout.

Offering content rich in biblical sources and Catholic tradition, and employing a fast-paced speaking style without notes, Father Barron addressed the priests as “my brothers” in four keynote speeches and numerous other homilies during Masses and communal prayer liturgies during the three days.

As priests model Christ in their ministry, they can trace the priesthood’s roots to the priests of the temple in ancient Jerusalem, Father Barron said in a keynote talk May 22.

Their role was to conduct “right praise” of God in the temple, mirroring that of Adam and all creation in the biblical Garden of Eden. By so doing, the people who were “twisted out of shape by sin” would be “realigned to God,” Father Barron said. “Israel would become so rightly ordered that they would be a magnet to all people in the world.” 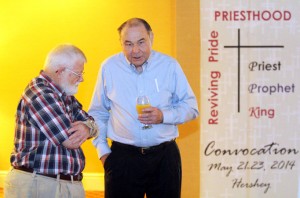 Fathers James Hutchins (left) and James Sherlock chat during a break at the convocation. (Sarah Webb)

Another key priestly role was to offer sacrifice of slaughtered animals on the temple altar – characterizing what Father Barron called a temple that “smelled like a barbeque pit” – and sprinkle the blood of the animals on the Jewish people to expiate their sins.

Jesus came as the new high priest, Father Barron explained, to offer not an animal but his own body and blood for the sins of the world. “Jesus takes on the sins of the world and continues to worship the Father,” said Father Barron, making the connection between praise of God and Jesus’ mission to heal humanity. “(Jesus) brings humanity twisted out of shape by sin back in line with the Father.”

The role of the priest to consecrate the Eucharist – Christ’s real body and blood – at every Mass recreates the sacrifice of Jesus. “We have the privilege of feeding our people with the lifeblood of God,” Father Barron said.

Jesus is also known as a prophet, and the priest is called to that role as well, according to Father Barron. The Hebrew word for prophet has the connotation of “mad man,” he said, and seeing the truth of the surrounding world and its “patterns of grace” should make the priest “seem a little foolish.”

He pointed to the biblical story of Elijah the prophet, who engaged in a contest with pagan priests to call on the power of their god, Baal. They danced frantically around their altar all day without a response. Elijah mocked them, and they not only danced faster and more frenetically, they slashed themselves. Finally, Elijah called on God who showed his power in fire, and the prophet won the contest.

“That great prophetic moment” of Elijah and the priests of Baal “is evocative of all the ways people give false praise,” Father Barron said. “Just dance around the altars and you will be happy” is the deceptive promise, he said, but the resulting unhappiness leads only to faster dancing and harming oneself.

He recalled that the Catholic mystic, Trappist Father Thomas Merton, identified the four “altars” around which people dance today: wealth, pleasure, power and honor. And priests are not immune to the allure of those altars and their “addictive rhythms.”

“We know the deepest longings of people won’t be filled with those four things,” Father Barron said. “Only one thing can satisfy those longings: “the fire of God’s love.”

As a priest among brother priests, Father Barron said, “We must mock these prophets” of today as Elijah did. “More than ever we are needed for that prophetic message.”

But doing so will have consequences for the priest, he said. Whether because of the fallout from the clergy sexual abuse scandal or the tide of secularization, “we all get marginalized” when trying to speak the truth by mocking false prophets.

“That is the strategy of the dark power,” Father Barron said. “We get pushed aside. We need to stand publicly for this prophetic message.”

For at least one priest in the audience, the speaker’s message was spot-on.

“Father Barron sees what is happening in the church,” said Msgr. John Marine, pastor of St. Bede the Venerable Parish in Holland. “He appreciates the importance of the priesthood and the need to be enthusiastic.”

Priests are, Msgr. Marine said, “marginalized by society and sometimes our own (Catholic) people. They marginalize you, and therefore the message. We don’t allow that to happen.”

He said that overall he found the convocation to be “inspiring,” as it allowed him to see priests that he otherwise would not often see.

“I always find there’s a value in bringing priests together, to come together as a presbyterate,” he said.

That sentiment was echoed by other priests including Father John R. McFadden (retired), who said the “most important thing is the camaraderie among the priests” attending the convocation.

Another priest, Msgr. Ralph Chieffo, pastor of St. Mary Magdalen Parish in Media, agreed he enjoyed seeing so many priests of the archdiocese in one place.

“We all have the same focus. We want to promote the Gospel,” he said. He enjoyed meeting younger priests, adding a priest at any age “has to love sinners” while recognizing that “we all struggle” in life, priests included. “We’re all on a journey.” 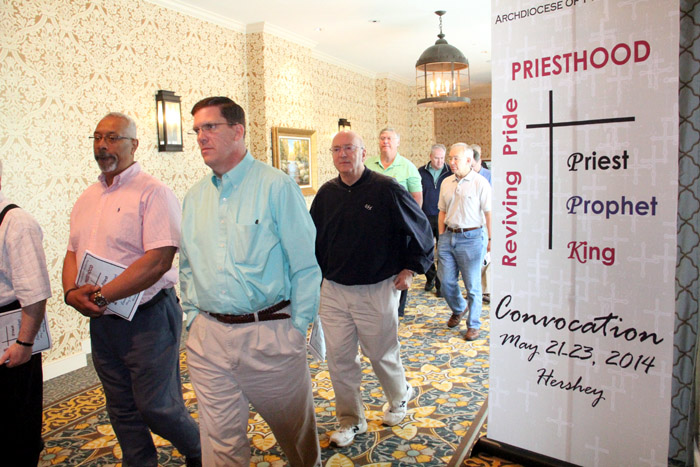 Msgr. Frederico Britto (left) and Father Christopher Redcay walk with other priests to a talk by keynote speaker Father Robert Barron at the Convocation of Priests.