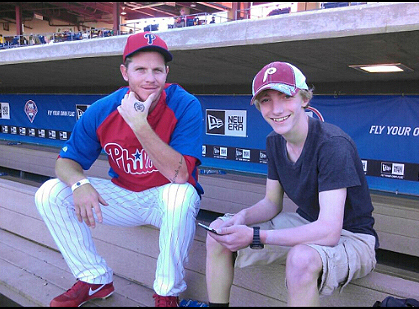 When Devon Prep freshman and baseball fan Joe Orsatti was asked if he’d like to spend a long weekend in Clearwater, Florida last winter to see the Phillies in spring training, he didn’t refuse.  His only hesitation was the class work and projects he’d have to make up when he returned.

He never imagined, however, that the trip to Florida would actually earn him an A on one of his assignments.

Before leaving for Florida, Orsatti’s teacher for Introduction to Catholicism, Joe Lewis, had assigned a project to the class. Among the topic suggestions was “What is Catholic Athletes for Christ?”

On his first day in Clearwater, Orsatti was hanging around the Phillies bullpen and briefly met Justin De Fratus, 26-year-old pitcher in the spring training camp who has since been optioned to the Lehigh Valley Iron Pigs in the Phillies’ minor league system. De Fratus happens to be a devout Catholic and a member of Catholic Athletes for Christ.

When Orsatti returned to his hotel that night he realized an interview with De Fratus would be great for his religion project. The challenge was how to get his attention and permission. Two days later Orsatti was at the ballpark watching the Phillies play.

“In the eighth inning the Phils had a comfortable lead so I decided to go over to the bullpen and ask Justin De Fratus if I could interview him for a religion project,” Orsatti said. “He wasn’t assigned to pitch that day so he was just chilling in the bullpen. He asked if I had the questions and I didn’t but I told him I could get them. He said if you can get the questions I’ll give you an interview after the game.”

Orsatti called a friend from school to get the questions and was ready for the interview by the time the game ended. He met De Fratus at the dugout and they went out to the field where the pitcher signed autographs. “I was just standing next to him like I was a big deal,” Orsatti said. “Then we went to the dugout and I interviewed him for about half an hour.”

Orsatti is an avid baseball fan who dreams of one day being the general manager of a professional baseball team. Currently the ninth grader serves as the manager of Devon Prep’s JV baseball team. He loves statistics and follows baseball closely. He was familiar with De Fratus long before meeting him in Clearwater.

“I love tracking the minor league systems so I was able to track his stats as he was coming up through the system,” Orsatti said. “I had seen his name in the news as a top prospect over the years so I was familiar with who he was. I knew he was in line for a middle relief role this year.”

Through the interview, however, Orsatti saw a different, more personal side of the California native. De Fratus is involved with the organization Catholic Athletes for Christ (CAC) whose mission is to serve Catholic athletes and share the Gospel of Christ in and through athletics. The organization provides a network of sports-oriented clergy and lay people to support Catholic athletes, coaches and staff in the practice of their faith.

De Fratus, who was raised Catholic, openly discussed the importance of his faith in all that he does and how his life changed when he took it more seriously.

“Success on the baseball field will only take you so far and you are still going to have that empty feeling, or hunger for God,” De Fratus told Orsatti. “You’re never going to be fully fulfilled if you are not walking with Christ and mentally, I am a much healthier person because of it.”

“I was inspired by what he had to say,” Orsatti said. “He was very interesting. He talked about Mike Sweeney, a former Phillie who is also involved in CAC.  Justin said Sweeney was voted the nicest baseball player by other baseball players. Justin called him a modern-day saint.”

“I love his views,” Orsatti said. “He says it’s OK to go out and have fun, but you have to put God first. He said his faith doesn’t hold him back from having fun. It’s OK to watch today’s shows and listen to today’s music, hang out with your friends and do everyday things, just as long you don’t put those things before God.  That’s how he lives his life.”

Orsatti later reflected on his experience, calling the unexpected meeting and interview “easily the coolest thing that has ever happened to me. To top it off Justin told me to tweet him my grade. I got a 97.”