Church is essential for faith; there are no ‘free agents,’ pope says 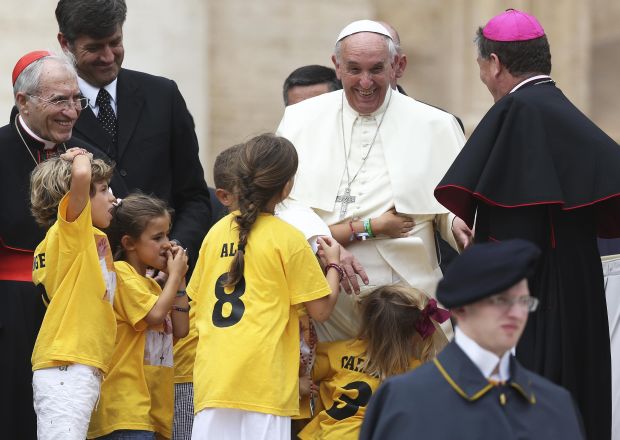 Pope Francis smiles as he meets children during his June 25 general audience in St. Peter's Square at the Vatican. (CNS photo/Alessandro Bianchi, Reuters)

VATICAN CITY (CNS) — Christians are not made in a laboratory, but in a community called the church, Pope Francis said.

At his weekly general audience June 25, Pope Francis continued his series of audience talks about the church, telling an estimated 33,000 people that there is no such thing as “do-it-yourself” Christians or “free agents” when it comes to faith.

Every Christian, he said, can trace his or her faith back to parents, grandparents, teachers or friends. “I always remember the nun who taught me catechism. I know she’s in heaven because she was a holy woman,” he said.

In the Old Testament, the pope said, God called Abraham and began to form a people that would become a blessing for the world. “With great patience — and God has a lot of it — he prepared the people of the ancient covenant and in Jesus Christ constituted them as a sign and instrument of the union of humanity with God and unity with one another.”

Pope Francis described as “dangerous” the temptation to believe that one can have “a personal, direct, immediate relationship with Jesus Christ without communion with and the mediation of the church.”

Obviously, he said, it is not always easy to walk the path of faith with other people. “Sometimes it’s tiring. It can happen that a brother or sister creates problems for us or scandalizes us, but the Lord entrusted his message of salvation to human beings, to us, to witnesses,” he said.

At the end of his talk, the pope asked people to join him in praying that they would never “give into the temptation of thinking you can do without others, without the church, that you can save yourself, of thinking you can be a laboratory Christian.”

Christians, he said, are not manufactured in isolation, but belong to a long line of believers who handed on the faith and challenged one another to live it fully.

The audience was the last the pope was scheduled to hold before beginning a reduced summer schedule.

PREVIOUS: Bride-to-be has wedding set, now she needs a priest

NEXT: Pope: Love’s giving, not receiving; it’s best through action, not words