Jesus in heaven still holds our hand, shows us the way, pope says 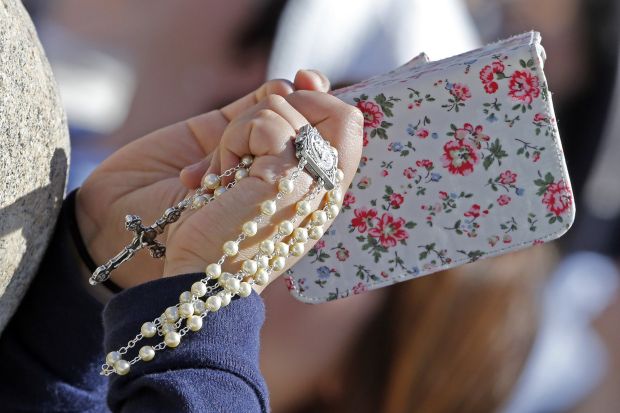 A woman holds a rosary as Pope Francis delivers his recitation of the "Regina Coeli" from the window of his studio overlooking St. Peter's Square at the Vatican June 1. (CNS photo/Giampiero Sposito, Reuters)

VATICAN CITY (CNS) — Although Christ ascended into heaven, he remains present in a new form through the gifts and power of the Holy Spirit in order to accompany and guide people in their daily lives, Pope Francis said.

Because, “by ourselves, without Jesus, we can’t do anything,” he said at his Regina Coeli address to those gathered in St. Peter’s Square on June 1, the day the feast of the Ascension was celebrated in Italy and many other countries.

The feast day comes 40 days after Easter and commemorates Jesus’ ascension into heaven to be seated at the right hand of God. But some countries, like Italy, observe the feast day the following Sunday.

Pope Francis said Jesus returns to heaven to open the way and “show us that the destination of our journey is the Father.”

But Jesus still “remains present and operates in human history with the power and gifts of his Spirit; he is by the side of each one of us; even if we don’t see him with our eyes,” he said.

“He is here! He accompanies us, guides us, he takes us by the hand and lifts us back up when we fall,” giving special attention and support to those who are persecuted and discriminated against because of their faith, the pope said.

After leading the “Regina Coeli” prayer, the pope also appealed for dialogue and peace in Ukraine and the Central African Republic. He said he was praying for all those affected by the conflicts there.

While Ukraine has been facing aggression by pro-Russian separatists, thousands of people in the Central African Republic have died and up to 1.5 million people have been displaced by violence since December 2012. Arab-speaking Islamists, known as Seleka, have been clashing with groups from a mostly Christian militia, known as Anti-Balaka, despite the deployment of thousands of French and African peacekeepers.

Pope Francis renewed his appeal for all sides involved in the conflicts to “overcome misunderstandings and patiently seek dialogue and peace.”

The previous day, the pope met with about 500 disadvantaged young girls and boys from Rome and Naples.

He told them to always look for and head toward “the light” of hope and Christ.

Everyone possesses this light inside of them and everyone can use it to build a better world, he told the children during the informal gathering in the Vatican’s Paul VI hall May 31.

He reminded them that the only way to build a better world was with love, not hate, and to do so together and side by side with Jesus.

As the pope told them, “God is love. And we head toward the light to find God’s love,” he also quizzed the children often during their quick and informal exchange.

“Is God’s love inside us even during those dark moments? Is it still there, hiding?” he asked.

After their affirmative shouts, he added, “Yes, always! God’s love never leaves us. He is always with us. Always trust in this love, OK?”

When people go forward in life with God’s love, “everything will be all right,” he said.

PREVIOUS: Legionaries of Christ are not disbanded, but healing