Catholics work with other Christians to rebuild a neighborhood 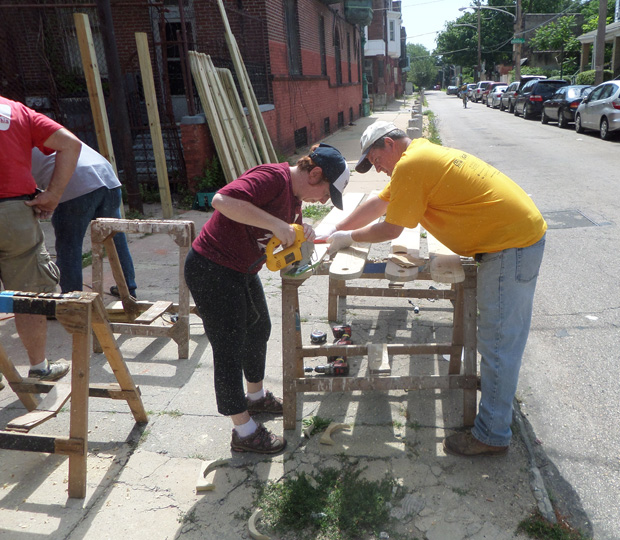 Heather Coyne of First Presbyterian Church (left) and Doug Kitson of St. Cornelius Parish build a fence, and a kind of ecumenical bridge, June 28 on Viola Street in the Parkside neighborhood of West Philadelphia. (Photos by Lou Baldwin) 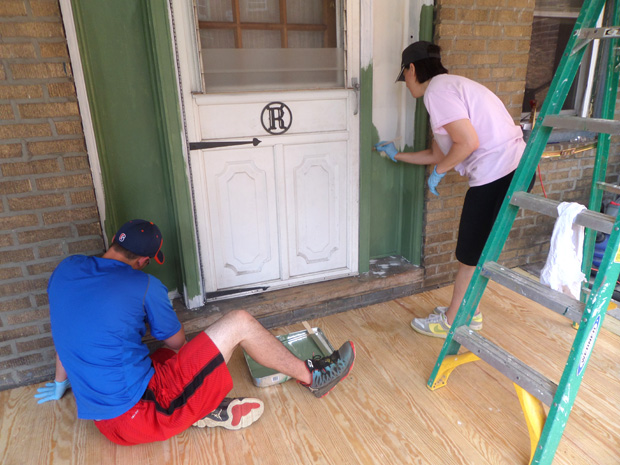 Mother and son Philip and Donna Matranga of St. Cornelius paint a newly refurbished porch at the home they’re helping to rebuild.

When 15 or so members of St. Cornelius Parish, Chadds Ford, agreed to participate in Habitat for Humanity’s Building on Faith Week in the Parkside section of West Philadelphia on June 28, they didn’t realize they would be part of a demonstration of ecumenical cooperation at its finest.

The project was the rehabilitation of homes on the 4200 block of Viola Street, and working together were Baptists, Catholics, Episcopalians, Methodists, Presbyterians, independent churches and secular groups, all cheerfully hammering, painting and sawing away just as if it was their everyday livelihood.

“We came here to do more than just go to Mass — to live our faith the way Jesus wants us to,” said Dan Dougherty, a spokesperson for the St. Cornelius group. “It was really our pastor Msgr. (Gregory) Parlante’s idea that we do more in the community.”

Other Catholic groups listed in the project, although not necessarily at the same time, were Philadelphia’s Old St. Joseph’s Parish and St. Joseph’s Prep.

The project had started on June 26 and was in response to a request from the community itself, according to Carrie Rathmann, a staff member of Habitat for Humanity. The residents asked Habitat to build homes, but after studying the area, the organization decided rehabilitating existent homes would be most practical.

It probably made sense because the Viola Street homes had certainly seen better days but they were sturdily built to last. If the St. Cornelius group chose to wander a block or so north they would have come upon the rows of stunning mansions on Parkside Avenue, easily as grand as anything in today’s more affluent suburbs.

They were built around the 1870s mostly for Philadelphia’s German elite, facing the great Centennial Exhibition just across the avenue in Fairmount Park. After many years of neglect they are now mostly restored as apartment houses.

Back on Viola Street, Heather Coyne of First Presbyterian Church in Philadelphia and Doug Kitson of St. Cornelius were working together cutting pieces for a sturdy fence. 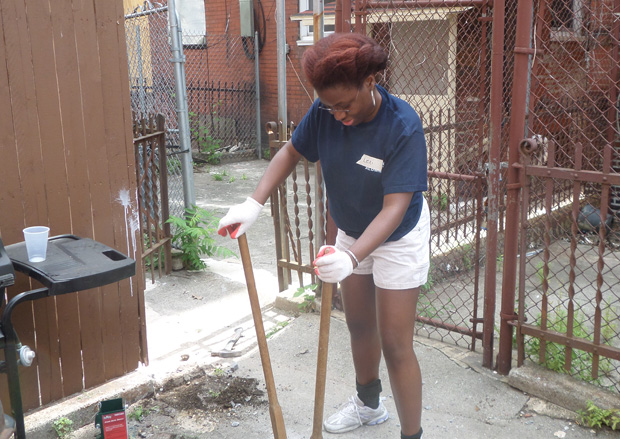 Lexi McFadden of Old St. Joseph Parish does the hard work of digging post holes at the home.

“I did another project before in West Chester,” Doug said. “It’s a good cause and it brings a sense of security to the homeowners.”

Donna Matranga and her son Philip, both of St. Cornelius, were industriously painting a house porch. Donna has always been interested in volunteerism, but admits she hasn’t had much construction experience. “Painting is my best skill,” she said.

Philip, on the other hand, is a college student who is working this summer doing maintenance for St. Cornelius Parish, but this was strictly volunteer work.

Lexi McFadden who came with a group from Old St. Joseph’s was busy digging post holes with a clam shell digger. Actually she lives near the Franklin Institute but joined St. Joseph’s when she became Catholic after her college years.

Because her mother lives near Parkside, “This was a great way to give back to my own community,” Lexi said. “Our young adult group at St. Joe’s organized this because social service is a strong part of our faith community. We were here Wednesday too.”

Devin Henry, another Habitat staffer, is with the group in her second year as an AmeriCorps volunteer. A member of St. Mary Magdalen Parish in Media, she said, “I love that we can have such an impact on the community in such a short time. The homeowners have been out working with us every day too.”

NEXT: Archbishop hopes court ruling will have ‘positive impact’ on archdiocese