Catholics love statues, but not as idols — and the Bible approves

Q. In the Book of Revelation (9:20), I read this: “The rest of the human race, who were not killed by these plagues, did not repent of the works of their hands, to give up the worship of demons and idols made from gold, silver, bronze and wood, which cannot see or hear or walk.”

Why, then, do Catholics worship statues? Aren’t they religious idols?” (St. James, Missouri)

A. Catholics do not worship statues. They use statues of Christ or of the saints to help them recall the people those statues represent — just as it is easier to remember one’s mother by looking at a photograph of her.

When Catholics pray before a statue, they are not adoring the marble or the wood used to create it. They are reminding themselves of the virtues displayed by those depicted and asking for heavenly help in their lives. 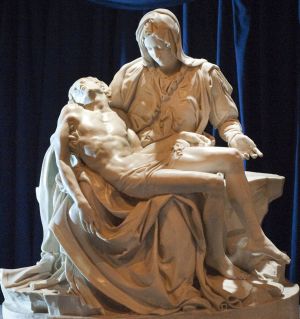 God forbade the worship of statues, but he did not forbid making statues for religious purposes. Some who attack the church on this refer to the passage in the Book of Exodus (20:4-5) that says: “You shall not make for yourself an idol or a likeness of anything in the heavens above or on the earth below or in the waters beneath the earth; you shall not bow down before them or serve them.”

But one need only read a bit further in Exodus (25:18) to hear the Lord’s command that statues of angels be fashioned: “Make two cherubim of beaten gold for the two ends of the cover.”

Q. I am a confirmed and practicing Catholic, and my divorced fiance was dedicated in the Baptist Church. We are in the middle of the annulment process, which has been frustrating since we did not realize how long the process would take, and we hear very little in the way of updates.

But let me get to my real question. In my family there is something of a tradition of having one of our family members, who is a member of the clergy, perform our weddings. My late great-uncle was a Maryknoll priest and officiated at the weddings of my grandparents, my parents and my brother and his wife.

We have a Methodist minister in the family who has also done the weddings of several of our relatives. I would love to continue this tradition by having my uncle marry my fiance, and me, but I fear even asking because I assume that the answer from my parish will be no.

On the chance that I could get that permission, if we decided to get married by my Methodist uncle, would we have to wait for the annulment to be approved? (Clearwater, Florida)

A. First, you can dismiss your fear and ask permission for your uncle to do your wedding ceremony. The Catholic Church can, and often does, allow non-Catholic clergy to officiate at a wedding involving a Catholic — particularly in a situation like yours, where your fiance is a Protestant and the minister is your uncle.

However, for the marriage to be considered valid by the Catholic Church, you would have to wait for an annulment to be granted before you would receive permission for your uncle to officiate.

As for the duration of the annulment process, in my diocese the norm is about one year from the time the paperwork is submitted until the case is concluded — but there is some variation from place to place.

Marriage tribunals typically resist any attempt to jump a case forward — justifiably, because that would not be fair to the other couples waiting in line — but it may be possible for your parish priest to see what stage your case is at, so that you would have a rough idea as to the timing. (Priests and parishes are prohibited from scheduling a wedding until an annulment has been granted.)

(Questions may be sent to Father Kenneth Doyle at askfatherdoyle@gmail.com and 40 Hopewell St., Albany, N.Y. 12208.)

NEXT: Is it OK to attend a Presbyterian service instead of Mass?