How priests can minister to people of same-sex attraction 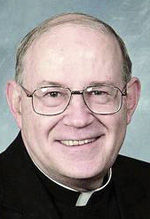 Founded in 1980 by the late Terence Cardinal Cooke of New York, Courage is a Roman Catholic apostolate offering a spiritual support system to assist men and women with same-sex attractions in living chaste lives in fellowship, truth and love.

With the endorsement of the Holy See, Courage now has more than 100 chapters and contact people worldwide, including the Philadelphia chapter, whose chaplain is Father Philip G. Bochanski, C.O., of the Oratory at St. Francis Xavier Church. EnCourage is its partner organization for parents and friends of members.

Six priests of the Archdiocese of Philadelphia accepted Father Bochanski’s invitation to participate in the July 18 Pastoral Seminar for Clergy segment of the conference, along with 34 other priests nationwide.

Father Paul N. Check, Courage’s executive director and national chaplain, called the conference “a unique event in the life of the Church.” A former U.S. Marine Corps captain and a priest of the Diocese of Bridgeport, Conn., Father Check told the Catholic World Report newspaper in a December 2010 interview:

“The Courage apostolate is that maternal solicitude on the part of the Church to people who have a unique struggle, an often difficult and vexing one, and who want to know that the grace of Christ and his Cross is available to them in concrete and practical ways. This is part of the charism of Courage and what was in the mind and heart of our founder Cardinal Cooke. It is a desire to express the Church’s care and affection for a group of people who often feel isolated. I don’t just say lonely, but isolated. They’re uncertain about where they can find assistance, who really takes an interest in them and who has a love for them. The Church does.”

Father Check, who led the Pastoral Seminar for Clergy, introduced guest speakers Father Peter Ryan, S.J., executive director of the Secretariat of Doctrine and Canonical Affairs of the U.S. Conference of Catholic Bishops, who presented the theological anthropology that undergirds the Church’s teaching on human sexuality; and, Dr. Michael Horne, a clinical psychologist with Catholic Charities of the Diocese of Arlington, Va., who presented the psychological and social sciences perspective of same-sex attraction.

Father Check concluded the seminar with a presentation on a priest’s pastoral response.

“I used to receive letters from homosexual persons,” the pope said, “who are ‘socially wounded’ because they tell me that they feel like the Church has always condemned them. But the Church does not want to do this.”

He went on to describe the role priests play in the lives of those who are wounded in this way. “In life, God accompanies persons,” he said, “and we must accompany them, starting from their situation. It is necessary to accompany them with mercy.”

In his letter dated Dec. 1, 2013 to Philadelphia archdiocesan priests inviting our participation in the conference and our attendance at the seminar, Father Bochanski wrote, “I am convinced that your participation in the Courage conference next summer will help you to be devoted ‘ministers of mercy,’ the ‘field hospital’ physicians that the pope is looking for and that God’s people need so much.”

For more information, visit the Courage websites at couragerc.org and phillycourage.com.

NEXT: Another great leap for mankind is long overdue