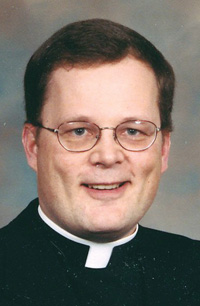 Roman Catholic High School will welcome Father Joseph W. Bongard, a 1977 graduate of the center city archdiocesan high school, as its new rector and president Aug. 1. He returns to the school he led as rector from 2006 to 2010 before serving as vice rector of St. Charles Borromeo Seminary in Wynnewood for the past four years.

“Father Bongard is a veteran educator and administrator who has given years of dedicated service to educating students in secondary schools throughout the Archdiocese of Philadelphia,” said Christopher Mominey, chief operating officer of Faith in the Future Foundation and archdiocesan secretary for Catholic education in making the announcement July 30. “He knows the Roman Catholic High School community well. He is both a proud graduate and a former rector of the school.

“Father Bongard is an obvious choice to lead the young men of Roman Catholic High School for Boys both spiritually and academically into a new chapter of an already rich history of Catholic education in Philadelphia.”