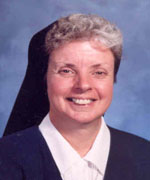 Sister James Grace Sheeran died July 6 in Camilla Hall, Immaculata, in the 47th year of her religious life. She was 65 years old.

Born in Philadelphia, Sister James Grace entered the Congregation of the Sisters, Servants of the Immaculate Heart of Mary in 1966 from Immaculate Conception Parish, Germantown, and professed her vows in 1969.

Sister James Grace taught first and second grades for more than 40 years in the Archdiocese of Philadelphia and the Diocese of Camden.

The funeral Mass was celebrated at Camilla Hall on July 12.

She was predeceased by her parents, James and Grace Bleiler Sheeran and siblings, James, Sheeran, Sallie Schirmer and Gretchen O’Mara.