Sister Dorothy Epple dies at 86, was primarily a teacher 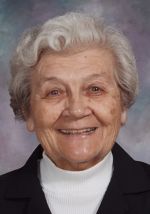 Sister Dorothy Epple, 86, (formerly Sister Anne Jerome) died Tuesday, June 24 in Assisi House, Aston. She had been a professed member of the Sisters of St. Francis of Philadelphia for 66 years.

Sister Dorothy was born in Baltimore and entered the congregation in 1945, professing her first vows in 1948. She earned a Bachelor of Science degree in secondary education and a master’s in biology, both from Villanova University.

She ministered primarily in education on both elementary and secondary levels, in congregational ministry and in parish ministry.

Sister Dorothy ministered in the Archdiocese of Philadelphia for 10 years. From 1970-1971 she was formation director for the Sisters of St. Francis and as such resided and worked at Our Lady of Angels Convent in Aston. She taught at Lansdale Catholic High School from 1971-1972. From 2005-2010 she lived in Queen of Peace Convent, the congregation’s independent living residence, and volunteered in the congregational offices. In 2010 she moved to Assisi House in Aston where she served in prayer ministry until her death.

From 1981-1985 she was also a member of the provincial council for the former St. Joseph Province for the Sisters of St. Francis and as such worked with sisters in Delaware, Maryland, Washington, D.C., and the deep South. Sister Dorothy’s ministry in the Diocese of Wilmington included teaching at Padua Academy (1983-1985).

The funeral Mass was June 30 with burial in Our Lady of Angels Cemetery in Aston.

Sister Dorothy is survived by her sister-in-law, Agnes Epple, nieces, a nephew and by her Franciscan family.