Padre Pio was a saint for our time 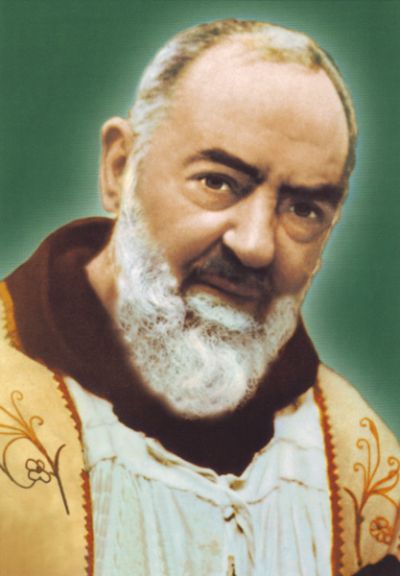 On Sept. 23 the church celebrated the feast of St. Pius of Pietrelcina, commonly known as Padre Pio, who was a friar, priest, mystic, stigmatist and saint. Throughout his entire lifetime Padre Pio was given extraordinary gifts from God — the stigmata, the gift of prophecy, the gift of the priesthood, the gift of faith.

In 1987 Pope John Paul II went to San Giovanni Rotundo, a remarkable event since it was the first time that a pope visited that holy sanctuary along with 50,000 pilgrims from all over the world. During that visit John Paul II recounted in a homily Padre Pio’s own words about his priesthood:  “Into the depths of this soul, God has poured many graces of compassion for the miseries of others, especially with respect to the poor and the needy.  Just to see one saved I would take on all his afflictions, yielding in his favor the fruits of this suffering if the Lord would permit me.”

Fifteen years later Pope John Paul II would raise Padre Pio to sainthood in the largest gathering of faithful ever in Rome for a canonization.

For 50 years Padre Pio would endure the stigmata. On Sept. 20, 1918, the “crucifixion” of Padre Pio took place, that is, he received the stigmata. On that day while hearing confessions he experienced bodily marks, pain and bleeding in locations that correspond to the crucifixion wounds of Jesus Christ, so that in a remarkable manner he would participate in the redemptive mission of Jesus Christ.

People flocked to San Giovanni Rotundo to hear Mass celebrated by Padre Pio, the “living crucifix.” All those attending the Mass celebrated by Padre Pio always experienced something of a rebirth in their lives.  He considered the Eucharist as “the greatest means for aspiring to perfection.”  He wanted his spiritual sons and daughters to approach the altar daily with faith and love to receive the “bread of angels.”  When asked, “Father, what shall we do when you are no longer with us?”  he answered, “Go before the tabernacle; in Jesus you will also find me.”

Padre Pio would spend between 18 and 20 hours between the altar and the confessional every day.  While hearing confessions he was inundated with shame and sin while participating in the agony of the Redeemer.  He was a mediator, who without overdoing it or substituting himself for God, led the soul by hand to God.  He was also a true prophet, not in the sense of seeing divinization, but as one who speaks in the name of the Lord, comforting the soul and resolving its problems and fulfilling its holy desires.

While hearing confessions, Padre Pio would constantly turn his gaze toward the tabernacle.  He claimed that one always had to “fly to the tabernacle in spirit and pour forth your ardent longings and speak and pray and embrace the beloved of souls.”

The love of Jesus in the Eucharist was intimately connected with love for Mary. He wrote, “I feel that I am closely bound to the Son through the Mother, without seeing the chains that hold me fast … I am constantly dying and yet forever alive.” With the passage of time his love for Mary became more fervent. He loved to call her “Mammina” (“Little Mama”).

Padre Pio showed his Marian devotion by his constant and uninterrupted recitation of the rosary.  He always had the rosary in his bleeding hands since he considered it a powerful weapon. “This prayer, the rosary, is a summary of our faith; the basis of our hope; the outpouring of our charity, he said.” In the monastery he spent many hours in prayer before the statue of Santa Maria delle Grazie, and asked her intercession on behalf of those who had come to him for help.

On the level of charity, he committed himself to the relieving of the pain and suffering of many people through the foundation of the Casa Sollievo della Sofferneza (House for the Relief of Suffering) in San Giovanni Rotondo, which today is one of the best hospitals in all of Italy.

Padre Pio sincerely thought of himself as unworthy of the many gifts of God, full of weakness and sickness.  Even though he was recognized as holy throughout the world, he would say, “I only want to be a poor friar who prays.” He died on Sept. 22, 1968 repeating the words, “Gesú, Maria.” In the years following his death, he enjoyed a great reputation for sanctity because of his virtues, his spirit of prayer, sacrifice and total dedication to saving souls.

There is great devotion to St. Pio of Pietrelcina in the Archdiocese of Philadelphia. His statues are found in many churches. At Holy Saviour Parish in Norristown there is a Padre Pio Prayer Group that has been in existence for almost 45 years. The group meets every first Saturday of the month beginning with the rosary followed by Mass.  Afterward people have the opportunity to be blessed with one of Padre Pio’s gloves, which was given by the friars in San Giovanni Rotondo to the parish.

In 1966 Mrs. Calandra gave birth to her fifth child. This baby was born with a severe urinary tract defect and was operated on several times by Dr. C. Everett Koop of Children’s Hospital in Philadelphia. The surgeon eventually removed the child’s bladder and told her parents that she would not survive. In 1968 Mrs. Calandra went to Padre Pio’s monastery in Italy with the 2-year old child and another daughter.  Padre Pio blessed them, placing his wounded hands upon their heads. Later in Norristown, Vera Marie’s bladder began to grow back. Padre Pio died later that same year.

Pope John Paul II at the canonization of Padre Pio in 2002 preached that “This great saint was a generous dispenser of divine mercy, making himself available to all by welcoming them at Mass, by spiritual direction and especially by the administering of the sacrament of penance. He loved to say, ‘Prayer is the best weapon we have, a key that opens the heart of God.’”

May we all follow in the spiritual footsteps of this beloved saint Padre Pio of Pietrelcina!

PREVIOUS: A time to talk, a time to listen — in church

NEXT: Lying is (almost) always wrong