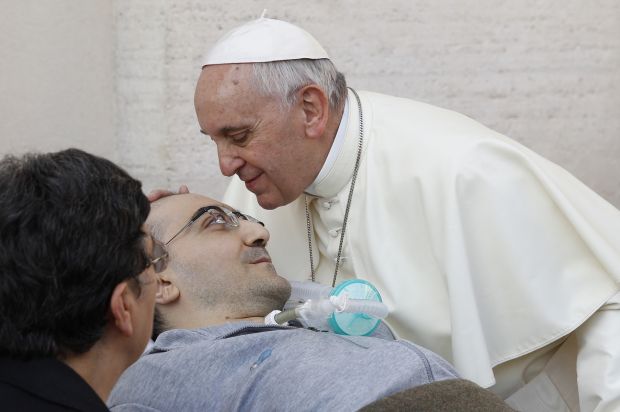 Pope Francis kisses the forehead of Salvatore D'Argento from Chieti, Italy, as he arrives to lead his general audience in St. Peter's Square at the Vatican Sept. 10. D'Argento has quadriplegia. (CNS photo/Paul Haring)

VATICAN CITY (CNS) — Christians are called to help those who have nothing to give and love those who don’t love back, Pope Francis said.

Salvation and changing the world for the better require “doing good to those who aren’t able to repay us, just like the Father did with us, giving us Jesus,” the pope said at his weekly general audience in St. Peter’s Square Sept 10.

“How much have we paid for our redemption? Nothing! It was all free! So do good without expecting something in return. Just as the father did with us, we have to do the same. Do good and keep going!”

People are called not to be self-centered, but to model themselves after Jesus’ gratuitous love, he said.

The pope continued a series of talks on the nature of the Catholic Church, focusing on “the church as a mother who teaches us the works of mercy.”

The Gospel is all about showing others mercy, the pope said. He referred to “The Judgment of the Nations” in Matthew, Chapter 25, which reveals that those who feed the hungry, clothe the naked, welcome the stranger, care for the sick and visit the imprisoned inherit God’s kingdom.

“Could a Christian who isn’t merciful ever exist? No! A Christian must by necessity be merciful because this is the core of the Gospel,” he said.

The church “doesn’t give theoretical lessons about love and mercy. She doesn’t spread a philosophy to the world, a path to wisdom,” he said. The church backs up what she says by mirroring what Jesus did.

While Christianity is also about the written word and church teachings, the church “teaches, like Jesus, by her example, and words serve to illuminate the meaning behind her gestures,” he said.

Asking how the church shows people the way, Pope Francis said the lives of saints and mothers and fathers who teach their children what true mercy and hospitality entail offer good examples to follow.

Pope Francis then told the story of a mother he knew when he was archbishop of Buenos Aires, Argentina. He said her way of teaching was “a beautiful example that helped me a lot.”

The woman answered her door one day to see a man who came looking for food; her three very young children agreed that the mother should give the man something to eat, the pope recalled.

When the mother said, “OK, let’s all give the man half of what’s on each of our plates,” the children protested, “Oh no, that’s not right!” they said, coveting their own serving of steak and fried potatoes.

By making each child contribute, the mother taught them that giving was not some abstract gesture, but required “giving what’s really yours” to someone else, the pope said.

The pope said he realized people may also feel uncomfortable about visiting those in prison, thinking that “It’s dangerous! They are bad people!”

“Listen up. Each one of us is capable of doing the same thing done by that man or woman in jail. All of us are capable of sinning and making the same mistake in life. They are not worse than you and me!”

Showing mercy to those who have strayed can be life changing, he said. “Mercy overcomes every wall, every obstacle” and can instill new life and hope in others.

The pope also encouraged those in the Middle East to show mercy.

When greeting different language groups after his main catechesis, the pope told Arabic-speaking pilgrims, especially those from Syria and the Middle East, “to face hatred with love, conquer violence with forgiveness; respond to weapons with prayer.

“May the Lord reward your fidelity, instill in you courage in the fight against the forces of evil and open the eyes of those who are blinded by evil, so that they may soon see the light of truth and repent for their errors,” he said.

PREVIOUS: Fall brings with it a spiritual renewal

NEXT: Why the church does not ordain women