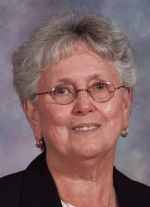 Sister Margaret Jones, O.S.F. (formerly Sister Jozeta Marie), 77, died Sept. 6 at Assisi House, Aston. She had been a professed member of the Sisters of St. Francis of Philadelphia for 55 years. Sister Margaret was born in Detroit and later moved to Allentown, Pa., where she was a member of St. Catherine Parish and a graduate of Allentown Central Catholic High School.

She entered the congregation in 1956 and professed her first vows in 1959. Sister Margaret earned a B.A. in English from Neumann University in 1967 and an M.A. in religious education from La Salle College in 1982. She ministered primarily in education, parish ministry, social services and health care.

Sister Margaret ministered for 25 years in the Archdiocese of Philadelphia. She taught at St. Pius X High School in Pottstown from 1983-1987. She was one of the founding sisters of St. Mary’s Franciscan Shelter in Phoenixville and ministered there from 1987-1991. Since 1997 she worked as a chaplain at St. Mary Medical Center in Langhorne. In 2014 she moved to Assisi House in Aston where she served in prayer ministry until her death.

Sister Margaret also ministered as a chaplain for six years in the Diocese of Allentown, as well as in the Diocese of Wilmington. She also taught in Maryland, Florida and South Carolina, and offered parish ministry in Puerto Rico.

All services will be held in Assisi House, 610 Red Hill Road in Aston, on Tuesday, Sept. 9. A Christian wake service will be held at 9:30 a.m. followed by a viewing. The funeral Mass will be at 11 a.m. Burial will be in Our Lady of Angels Cemetery in Aston.

Sister Margaret is survived by her brother, John Jones; by her nieces and nephews; and by her Franciscan family.