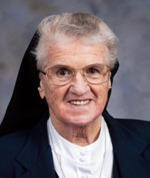 Sister Maureen Dennis McCormack died Sept. 16 at Camilla Halll, Immaculata, PA, in the 65th  year of her religious life.  She was 83 years old.

Born in Shenandoah, PA, Sister entered the Congregation of the Sisters, Servants of the Immaculate Heart of Mary in 1949 from Transfiguration Parish, Philadelphia , and professed her vows in 1952.

Most of Sister’s teaching years were spent in the Primary Grades in North and South America.  She spent eighteen years in our missions in Peru and for the last eighteen years before going to Camilla, taught and tutored in Queen of Peace, Coal Township.

The funeral Mass was celebrated at Camilla Hal on Sept. 20.  Reverend Monsignor Joseph Logrip was the celebrant and homilist.

NEXT: Franciscan Sister, professed for 63 years, dies at 87