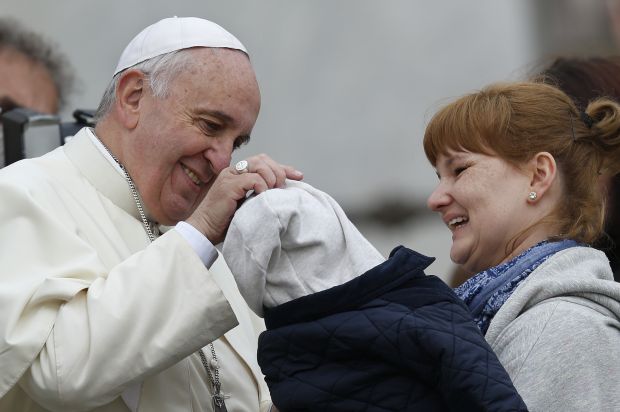 Pope Francis covers a child with a hood during his general audience in St. Peter's Square at the Vatican Oct. 29. (CNS photo/Paul Haring)

VATICAN CITY (CNS) — The way Christians behave can either help and inspire others, or turn them away from ever following Jesus, Pope Francis said.

“How many times we’ve heard in our neighborhoods, ‘Oh that person over there always goes to church, but he badmouths everyone, skins them alive.’ What a bad example to badmouth other people. This is not Christian,” the pope said at his weekly general audience in St. Peter’s Square Oct. 29.

Causing scandal and being a bad example turn people off, making them think, “Hey, if that is being Christian, I’ll be an atheist.’ That’s because our witness is what makes people see what it is to be a Christian,” he said.

The pope continued a series of talks on the nature of the Catholic Church, focusing on the visible and spiritual reality of the church.

The visible church can be seen in its many parishes, Christian communities and organizations as well as in its people, like the pope, priests and religious men and women all over the world, he said.

But the church — the body of Jesus — is also bigger than that because it is made up of the countless men and women who are baptized and “who believe, hope and love,” as well as offer “relief, comfort and peace” in the Lord’s name, the pope said.

“The visible reality of the church is not measureable, it cannot be known in its entirety,” he said, because of all the hidden works of charity and unsung heroic deeds, including within families with spouses being faithful to one another, working hard to raise their children in the faith or with the sick who offer up their suffering to God.

But the church also has a spiritual dimension, the pope said. And the only way to understand how the visible and the spiritual work together in the church is to look to Christ, who was both human and divine.

Just as Christ’s humanity served his divine mission of redemption and salvation, the church too must use its visible dimensions to serve the spiritual, he said.

The visible sacraments and the visible witness to Christ through serving others are how the church proclaims and brings God’s love to everyone, he said.

“The church is called every day to be close to every person, beginning with the one who is poor, the one who suffers and who is marginalized, so as to continue to let everyone experience the compassionate and merciful gaze of Jesus,” he said.

“Christ is the model, the model of the church because the church is his body, and he is the model for all Christians, every one of us,” Pope Francis said. “By looking to Christ, you cannot go wrong.”

However, he said, people are “fragile” and limited. “We are all sinners, all of us,” he said, asking his audience to give a show of hands of those who believe themselves free of sin.

“Let’s see, how many hands? You can’t, because we are all” sinners, he said.

While sin and human weakness can create “scandal” and plenty of bad examples in the church, God also lets people grow in holiness, he said.

“Let us ask then for the gift of faith so we can understand how — despite our insufficiencies and our deficiencies — the Lord truly has made us instruments of grace and a visible sign of his love for all of humanity.

PREVIOUS: Evangelization as a person-to-person dialogue