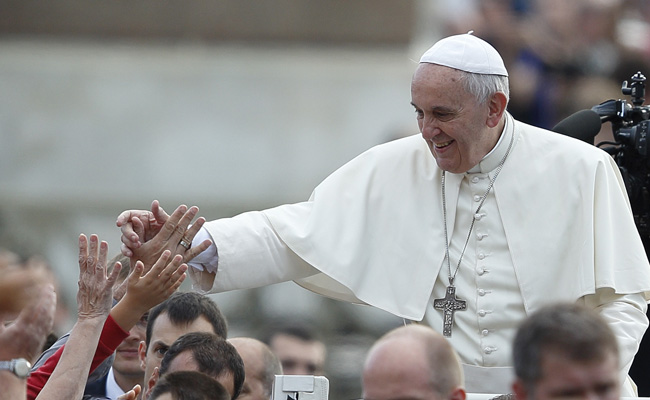 Pope Francis greets people as he arrives to lead his general audience in St. Peter's Square at the Vatican Oct. 22. (CNS photo/Paul Haring)

In a homily at morning Mass Oct. 24, Pope Francis referred to the day’s reading from St. Paul’s letter to the Ephesians (4: 1-6), describing it as “weak advice, according to human thought,” on how to promote unity of the church.

“Humility, gentleness, magnanimity: These are weak things, because the humble person appears good for nothing; gentleness, meekness appear useless,” the pope said, according to Vatican Radio.

“Bearing with one another through love, having what at heart? Preserving unity. The weaker we are with these virtues of humility, generosity, gentleness, meekness — the stronger we become as stones in this temple,” he said.

Later in the morning, Pope Francis received about 40 people who had traveled to Rome with a U.S.-based ecumenical group, the Orientale Lumen Foundation. The Orthodox and Catholic pilgrims were led by Orthodox Metropolitan Kallistos of Diokleia, an Orthodox scholar and retired professor at University of Oxford.

The pope told the group that the spiritual journey of pilgrimage is “absolutely essential for advancing along the road which leads to reconciliation and to full communion among all those who believe in Christ. There can be no genuine ecumenical dialogue without this openness to interior renewal and a desire for greater fidelity to Christ and his will.”

Pope Francis asked the group, which was scheduled to meet with Orthodox Ecumenical Patriarch Bartholomew of Constantinople early the following week, to convey his “cordial and fraternal good wishes” to the patriarch, considered first among equals by Orthodox bishops.

The pope said his upcoming meeting with Patriarch Bartholomew, during a Nov. 28-30 visit to Turkey, would be a sign of the “deep bond linking the sees of Rome and Constantinople, and of the desire to overcome, in love and truth, the obstacles which still separate us.”

PREVIOUS: A time for the rosary, and a time for silence

NEXT: Evangelization as a person-to-person dialogue