At South Philadelphia parish, their souls glorify the Lord 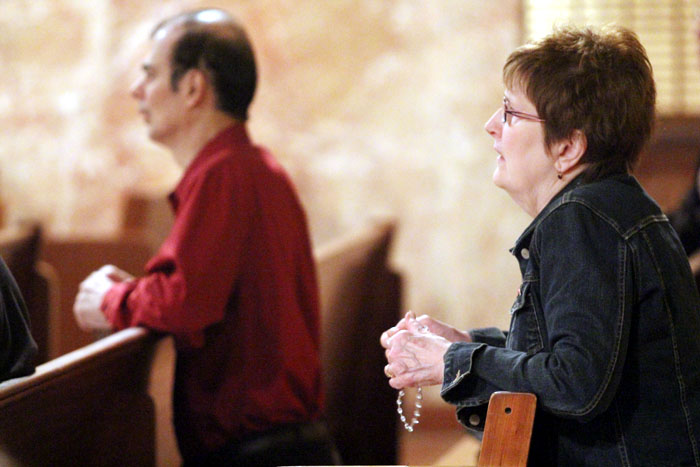 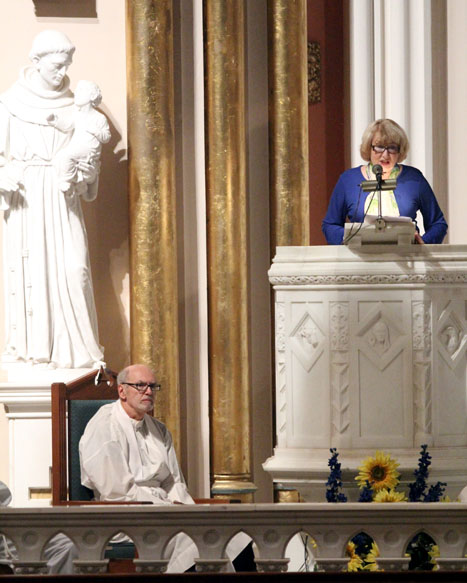 Dorothy McShane shares the story of her faith with the congregation at St. Paul’s, as parish pastor Father John Large listens. (Sarah Webb)

Dolores Macrina had a 50-50 shot of living after complications from surgery. She credits her devotion to the Blessed Mother and Mary’s influence in restoring her health.

Macrina was one of three ladies who spoke about the Blessed Mother’s intercession at St. Paul Parish in South Philadelphia, which held its Our Lady of the Rosary triduum from Sunday, Oct. 5 to Tuesday, Oct. 7. The three-day focus was part of the parish’s effort for the New Evangelization.

(See a photo gallery from the triduum’s final evening, here.)

She also discussed her progression as an accounting clerk at the age of 17 to a senior financial analyst, and spoke of Mary’s role in this development.

Macrina’s discourse ended the event in which a woman spoke every night and parishioners were encouraged to attend.

People also took part in eucharistic adoration and the rosary following each talk, all of which revolved around a theme — either the Annunciation, the Visitation or the Birth of Jesus — from the joyful mysteries of the rosary.

Dorothy McShane spoke on the second night of the triduum about Mary’s intercession at her mother’s deathbed. McShane’s mother used the Hail Mary as an answer to any problem in life.

The night of Oct. 7, the feast of Our Lady of the Rosary, culminated with a hymn and procession in the church and completed the parish’s first triduum celebration of the feast.

Macrina, the speaker on the last night, came up with the idea after seeing a novena at St. Rita’s, a neighboring South Philadelphia parish.

“Why don’t we do a triduum?” Macrina said, reflecting on her thought process at the time.

A group of people, including Macrina and St. Paul’s pastor, Father John Large, started planning the event in July.

Father Large said the speakers initially felt apprehension about giving the talks to the congregation. None of the three had ever given a talk from the pulpit before.

The pastor compared their experience with God asking Mary to be the Mother of Jesus.

“She didn’t say, ‘Well, I never did this before,’” Father Large said. “She just said she would.”

The triduum, a part of St. Paul’s response to spreading the Gospel message, is an effort to raise up and empower lay leaders in the parish community.

Father Large said everyone has a mission to be a leader in the Catholic Church.

The pastor even designated what he called “prayer warriors,” each leading the people in a decade of the rosary and responding to the call to action.