Father John Fitzgerald, known for ministry to the grieving, dies at 85 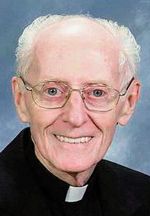 He was ordained May 11, 1957 by Archbishop John F. O’Hara at Immaculate Conception Church, Germantown, Philadelphia and his first assignment was as parochial vicar at St. Joseph Parish, Ashland.

Although teaching is not listed as his assignment during the years he was at Annunciation Parish in Shenandoah, that’s really what he did at the high school there. “He taught six classes of religion a day, he loved teaching,” said Father Charles Gormley, a good friend from the days they were both assigned to St. Helena Parish. “He was very perceptive, with a fine sense, always with little quips of humor, and had a fine way with people.”

His impact in Shenandoah so many years ago was such that “four of his pupils came down for his 80th birthday celebration,” Father Gormley said.

After his retirement Father Fitzgerald wanted to stay at a parish, and Father Thomas Dunleavy at St. Anselm welcomed having a retired priest living there who would celebrate Mass. But that’s not all he did — he also conducted a Saturday morning Scripture class to cover the weekend’s Mass readings and facilitate discussions about them, Father Dunleavy explained.

Possibly Father Fitzgerald will best be remembered for his compassion for those who are grieving. He was a co-founder of To Live Again (TLA), a group that supports people who have had a loss especially of a spouse, and his active support for Project Rachel, for women recovering from the pain of abortion.

“He was always interested in the poor and helping people to get their lives back together,” Father Dunleavy said.

Father Fitzgerald’s funeral Mass will be celebrated by Bishop Robert P. Maginnis at St. Anselm on Friday, Oct. 24 at 11 a.m. Concelebrants will include Msgrs. Michael Carroll, Ignatius Murray and Joseph Murray; Fathers George Boyle, Keith Chylinski and Richard Rudy; and Father Gormley and Father Dunleavy, who will be the homilist.

Father Fitzgerald is survived by his sister, Mary Everett, and nieces, nephews, grandnieces and grandnephews.

PREVIOUS: Franciscan sister, a teacher for 55 years in archdiocese, dies at 93

NEXT: Funeral rites set for Gloria Salvatore of Somerton