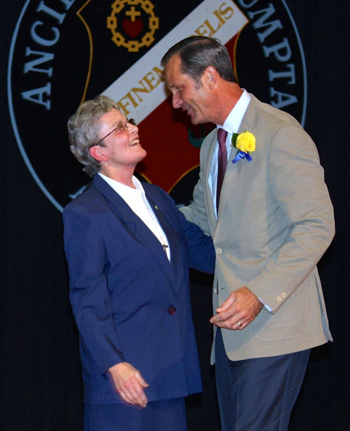 Charles (Chuck) Minnich was inducted into Ancillae-Assumpta Academy’s Alumni Hall of Fame this month. A graduate of the class of 1981, Minnich was honored at a ceremony held at the academy as part of the school’s annual Fiat Day celebration.

Ancillae-Assumpta Academy established its Alumni Hall of Fame in 2005 as part of its 60th anniversary celebration. The goals of the program are to acknowledge graduates of the academy who have distinguished themselves in their personal and/or professional endeavors, and to provide the current school community with examples of alumni who exhibit the ideals and values of education by the Handmaids of the Sacred Heart of Jesus, the congregation that sponsors the academy.

Minnich fits the bill. A co-founder of Foundation Capital Management, based in East Norriton Township, Minnich currently serves as its executive director. He is an accredited financial analyst, consultant and estate planner, and has been noted in local media.

Minnich has given of his time to Ancillae in many ways since he graduated, most recently serving on the school’s Middle States Reaccreditation Planning Team. He also serves on the La Salle College High School alumni board.

A resident of Wayne, Minnich and his wife, Betsy, have three children. Closer to home, Minnich has served as a lector at St. Katharine of Siena Parish in Wayne and is the chair of its school’s grants committee and part of its advancement team.

Minnich also serves as chair for the Rosemont School of the Holy Child’s annual golf outing and is a member of the school’s finance committee. He also has served as a sponsor and co-chair of St. Martin de Porres School’s gala committee.

“We are so pleased to induct Chuck Minnich into our Alumni Hall of Fame,” said Amy Lintner, Ancillae-Assumpta Academy’s director. “He has demonstrated a caring and warmth in all he has given back to the academy since he graduated, and I think that giving spirit comes through in everything he accomplishes, both personally and professionally.”

Based in Wyncote, Ancillae-Assumpta Academy is a private, co-educational, Catholic elementary school, grades preschool through eight.

NEXT: Second graders get their hands wet learning about baptism