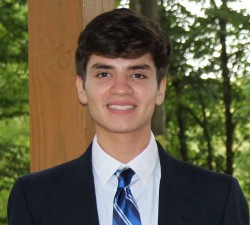 Devon Prep Senior Joshua Lieberman of Downingtown has been recognized as a National Hispanic Scholar by the College Board. Only 5,000 high scoring students among the more than 250,000 Hispanic/Latino juniors who took the 2013 PSAT/NMSQT received this recognition.

Last summer Lieberman was also awarded a full scholarship to attend the 2014 Telluride Association Summer Program (TASP), “Identity and Belonging from Primates to Posthumans,” at the University of Michigan.

TASP is a six-week educational program involving college-level seminars for gifted and highly motivated high school juniors. Only 64 students from 1,275 applications from around the world were chosen to participate.

In addition, Lieberman, a distinguished honor student at Devon Prep, was also recently named a National Merit Scholarship Program semi-finalist and an AP Scholar with Distinction.