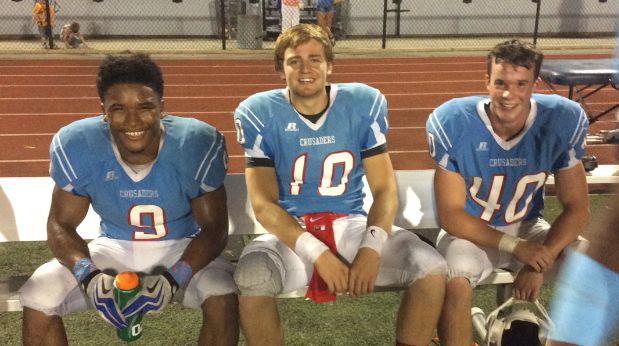 Zack Carroll (center), quarterback for Father Judge High School, takes a break with his teammates during a game this season.

Standing around on the sidelines with the game on the line was the last thing he wanted to do. But concussions have their own agenda.

So for the second, third and fourth quarters of a recent Catholic League Division AAAA game between Father Judge and Roman Catholic Oct. 9 in Conshohocken, Crusaders quarterback Zack Carroll acquiesced to the team trainer’s command that, thanks to a nasty helmet-to-helmet collision while trying to run for a first down early in the second quarter, he take the rest of the game off.

“I didn’t feel like myself,” Carroll said. “I think I was bleary-eyed. I told (Judge’s coaches) that I didn’t feel right. When the trainer tested me, he said I was done. Even though I was frustrated, I knew they had to take me out. They said they weren’t going to risk anything, and that is the right call.”

At first, Carroll found a spot on the Judge bench. He appeared lost. Later, he said he was simply trying to balance his physical trauma and emotional descent.

“I was scared,” he said. “My mind was racing. I wasn’t sure how serious this would be. I was thinking, ‘I only have a few more high school games left. I don’t want to lose them.’ After a while I was able to calm myself down.”

Instead of sulking, Carroll gathered himself and tried to contribute. First there was the matter of calming his mom’s fears.

Taking a break from her typical “job” of taking video and pictures, Carroll’s mother came toward the field to find out what was going on with her son.

“You know how moms are,” Carroll laughed. “She was worried, but I told her I had a concussion and was taken out for precautionary reasons.”

Trailing by 20-14 inside regulation’s final three minutes, Father Judge’s offense was trying to pull off an improbable comeback victory against a solid Roman defense. However, instead of barking out the signals to his gridiron peers from behind the center, the senior quarterback could only clap his hands and shout words of encouragement to sophomore QB Robert King from the sideline.

“It was weird,” Carroll said. “I’m used to being involved in all of our big plays.” The only thing he was thinking about on the sidelines was “watching Rob help us win this game.”

King (5 for 12, 106 yards, one touchdown throw to sophomore Raheem Blackshear) was unable to prevent Roman’s senior running back Dimetri Kelly (27 carries for 146 yards) and the Cahillites (4-4 overall, 1-1 league) from emerging victorious. The following week against defending Catholic League and Class AAAA Pennsylvania state champion St. Joseph’s Prep, Carroll was unable to play. In his place, King threw for 152 yards and one touchdown, but the Prep won, 35-14.

The Crusaders also admire Carroll’s football acumen, which has seen him complete 43 of 83 passes for 908 yards and nine touchdowns. But those decent numbers often become muted because of junior running back sensation Yeedee Thaenrat. Through Judge’s eight games, in which the Crusaders are 4-4 overall and 0-2 in the Catholic League, Thaenrat has rushed for 1,109 yards and scored 21 touchdowns.

Thaenrat recognizes that Carroll is largely responsible for his incredible numbers.

“We can do a lot of things in our offense,” Thaenrat said. “Zack is a key part of that.”

A transfer from Upper Moreland High School after his sophomore year, Carroll insisted that individual attention is not among his chief concerns.

“I’d rather play a lousy game and win rather than play a great game and lose,” Carroll said. “I think our coaches have instilled in us that winning is accomplished when everyone works together.”

Carroll extolled McKay for his paternal patience and wisdom.

“He tries to make us good players on the field and good men off the field,” Carroll said.

Takes one to know one.

PREVIOUS: Where they stand