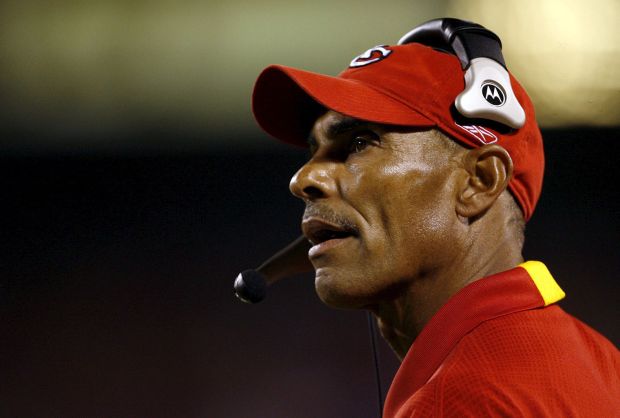 Herm Edwards, an ESPN football analyst, is pictured as head coach of the Kansas City Chiefs in 2006. The former NFL player and coach, who is a Catholic, spoke about his faith and education during an Oct. 12 dinner attended by supporters of Catholic schools in the Diocese of Sioux City, Iowa. (CNS photo/Larry Smith, EPA)

SIOUX CITY, Iowa (CNS) — Football may be Herm Edwards’ forte, but in a keynote address to Catholic school supporters in the Diocese of Sioux City, he talked about his Catholic faith and education.

The former NFL player and coach who is now an ESPN football analyst also drew some parallels between coaching and teaching.

“For a coach, you basically have four seconds to make a decision on what’s going to be done,” he told his audience at the Sioux City Convention Center. “You have to be able to adapt as a coach. That’s what teachers do. Teachers are able to adapt. They care about your children and my children.”

The No. 1 responsibility of a football coach, Edwards said, is “don’t allow the players to fail.”

“Teachers understand the students in their class,” said the speaker. “They adapt and make sure their students aren’t going to fail. That’s hard to do. Good teachers are good listeners. Good teachers make students ask why because the why in life gives you knowledge.”

As the father of daughters in second and third grade at a Catholic school, Edwards said he understands “the importance of Catholic education.”

He addressed 675 people who came from around the diocese to attend the 18th annual Bishop’s Dinner for Catholic Schools held Oct. 12.

As Catholics, Edwards said, “we have an obligation to be people of service. We have to make sure we are people of humility and our lives and our actions match up.”

“We all need to pray. We all deal with our circumstances in our life,” he said. “When you truly believe Jesus Christ is your Lord and savior, it all works out. When your priorities are right, it isn’t hard to make a decision. Live your life by faith.”

The evening included the presentation of education awards to three teachers and three staff members from Catholic schools. Sioux City Bishop R. Walker Nickless and Dan Ryan, the diocese’s superintendent of Catholic schools, were the presenters.

In his remarks, Edwards praised the award-winners, telling the audience: “Don’t lose sight of what they do and how they make a difference in all of our lives.”

Each of the teachers received the Excellence in Education Award; the Good Shepherd Award went to the staff members.

Ryan reported that the diocese currently has “a lot of great academic initiatives going on and programs that help your students develop their gifts from God,” including a number of construction and other projects at several Catholic schools.

“Our schools, families, parents and boards are looking to the future,” said Ryan. “They are preparing to be here for that next generation of Catholic students. I am so excited about that.”

In remarks to conclude the evening, Bishop Nickless told attendees he appreciates “the way you care about Catholic education.

“All of you have great gifts that make our diocese outstanding in terms of Catholic schools. I feel truly blessed to have dedicated educators. It is not always easy. Tonight is a way to say thank you for all that you do.”

He encouraged everyone to continue to promote the Catholic schools “that make a difference to so many people.”

Lefebvre is a reporter at The Catholic Globe, newspaper of the Diocese of Sioux City.