The world will end with peace, not annihilation, Pope Francis says 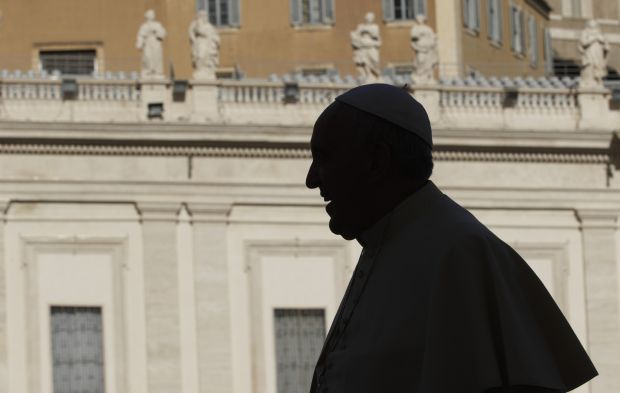 Pope Francis is silhouetted as he leaves his general audience in St. Peter's Square at the Vatican. (CNS photo/Paul Haring)

VATICAN CITY (CNS) — Believing in eternity and in the final establishment of the kingdom of God, Christians throughout history — starting with the disciples — were filled with questions such as when the end will come and what will happen to the created world, Pope Francis said.

No one knows the answer to those questions, the pope said Nov. 26 at his weekly general audience, but Catholics are convinced that the end of time will not bring the “annihilation of the cosmos and of everything around us.”

God’s plan, he said, is to renew everything in Christ and “bring everything to its fullness of being, truth and beauty.”

A few thousand people gathered under umbrellas in St. Peter’s Square for the rainy Wednesday audience; Pope Francis thanked them for braving the weather and promised, “we will pray together.”

Continuing a series of audience talks about the church, Pope Francis spoke about the place of the church in the world to come, and how Christians can make sure they and their loved ones will be part of it.

While the human imagination struggles to picture what the kingdom of God will be like, he said, people can be sure that everything “deformed by sin” will pass away. Quoting the Second Vatican Council’s Pastoral Constitution on the Church in the Modern World, he said, “God is preparing a new dwelling place and a new earth where justice will abide, and whose blessedness will answer and surpass all the longings for peace which spring up in the human heart.”

“This is where the church is heading,” he said. “More than a place, it is a state of the soul where our deepest aspirations will be fulfilled with abundance.”

The communion of the church cannot be broken by death and will only be stronger at the end of time, he said. “It is a deep communion between the church in heaven and that still journeying on earth. Those who already are living in the presence of God, in fact, can support, intercede and pray for us.”

And, Christians on earth, he said, “are called to offer good works, prayers and the (celebration of the) Eucharist to alleviate the tribulation of the souls still awaiting blessedness without end.”

At the end of the audience, Pope Francis told people he would be making a trip to Turkey Nov. 28-30 to meet government officials, Muslim leaders and, especially, Ecumenical Patriarch Bartholomew of Constantinople. The meeting with the patriarch takes place on the feast of St. Andrew, the patron of the patriarchate.

“I ask you all to pray that this visit of Peter to his brother Andrew will bring fruits of peace, sincere dialogue among religions and harmony in the Turkish nation,” the pope said.

PREVIOUS: Cultivate a ‘spirituality of encounter’ this Advent

NEXT: Paying attention ahead of the Christmas season