Franciscan sister dies at 97, taught for 71 years in archdiocese 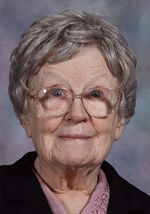 Sister Inez Cecilia Kockler, O.S.F., died Nov. 11 in Assisi House, Aston, at age 97. She had been a professed member of the Sisters of St. Francis of Philadelphia for 75 years.

Born Gladys Elizabeth Kockler, Sister Inez Cecilia was born in Philadelphia where she was a member of St. Columba Parish and a graduate of Hallahan High School. She entered the congregation in 1937 and professed her first vows in 1939.

Sister Inez earned a B.S. in secondary education and an M.A. in English, both from Villanova University. She ministered in education on both elementary and secondary levels.

The funeral Mass was celebrated Nov. 18 at Assisi House. Burial followed in Our Lady of Angels Cemetery in Aston.

Sister Inez Cecilia is survived by her brother, Norbert Kockler; nieces, nephews and by her Franciscan family. Donations in her name can be made to the Sisters of St. Francis Foundation, 609 S. Convent Road, Aston, PA 19014.

NEXT: Father Thomas Gleeson, S.J., dies at 78 in Wernersville