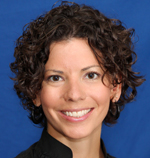 When I was a little girl, the Pope used to call my house.

The phone would ring. I would answer, “Hello, Squarcia residence.”  A man with a jubilant tone would reply, “May I please speak to your Mom and Dad?” “Sure,” I would say.  “May I ask who is calling?” “Tell them it’s the Pope,” the man would say.

They would laugh.  I would wonder why they weren’t as excited as I was to speak to THE POPE.

“Hi Msgr. Al,” I would hear my mom say, as she chuckled picking up the phone.  Msgr. Al was a longtime friend of my parents. He officiated their wedding and baptized my sisters, brother and me.  He was living in Rome and every so often he called to check in. He was a jokester of sorts and he fooled me every time.

When I first heard the news that Pope Francis would becoming to Philadelphia, I shrieked with the same excitement I did all those years ago when I thought John Paul II was calling my parents.  Perhaps it wasn’t quite as high pitched as my 9-year-old little girl scream, but the feeling internally was just the same.

Why? Why would I want to battle the 1 million people expected to flood the streets of Philadelphia? Philadelphia traffic during a non-Pope visit is terrible at best.  Why would I want to drag my two small children to a Mass where the celebrant might be over a mile away?  As it is, I practically have to stand on my head and pull rabbits out of hats just to keep the children still when we are sitting in the first pew at Mass on an ordinary Sunday. Why would I want to do all that when I could probably just watch it on TV from the comfort of my own home?

I never gave it a second thought. The positives of what this experience could be far outweigh the negatives. I texted my husband and said, “We are going.” He replied. “I know.”

But beyond my personal excitement, there is a much larger aura of enthusiasm across the Philadelphia Archdiocese which includes five counties and more than 1.4 million faithful. This is finally some good news. For once, area Catholics didn’t have to hold their breath for fear of what scandalous or heartbreaking news might come when they saw a TV news reporter standing outside the Cathedral.

Pope Francis’ announcement (and subsequent visit) is pumping a new vibrancy into this archdiocese and this city. With a focus on the family, he will drive home an important message not just for Philadelphians but for the entire world: family matters.

“Marriage and family are in crisis,” the Pope said as he made his announcement about the upcoming visit. His trip marks a tremendous opportunity for necessary renewal. The domestic church is where our faith is nurtured and developed.  It is the foundation on which disciples are made and the world is changed.

On Sept. 27, the city of brotherly love will experience a love that transcends all understanding.  There won’t be words to describe it, but our hearts will be changed.  That I know for certain.

Melissa Squarcia Fordyce, a Catholic wife and mother of two children, is the director of communications for Presby’s Inspired Life, which serves older adults in the Philadelphia region. She previously spent seven years with Catholic Leadership Institute in Exton. She is a catechist for fifth graders and an extraordinary minister of holy Communion. She can be reached at Melissa.a.Fordyce@gmail.com.

PREVIOUS: While running to meet Christ, keep an eye on the poor

NEXT: Christmas: The most inclusive time of the year