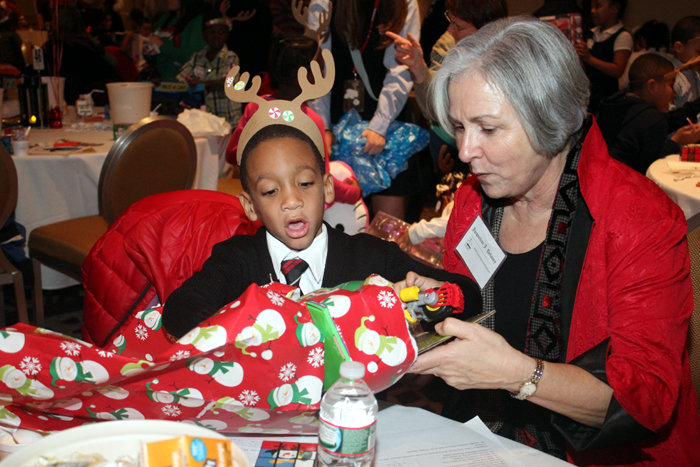 Jackie Delaney, chair of the Archbishop's Christmas Benefit for Children for the eighth consecutive year, helps a young guest at the party open his present.

It’s a tradition that Charles Dickens would love. Thursday, Dec. 18marked the 58th annual Archbishop’s Christmas Benefit for Children, held as it has been in recent years at the Sheraton Philadelphia Downtown Hotel, directly across the street from the Archdiocesan Pastoral Center on 17th Street.

“We love and God loves you, and a merry Christmas to all,” Archbishop Charles Chaput told his young guests. He also thanked the many volunteers who make the event possible, including Jackie Delaney, in her eighth year as chair for the party and the Sheraton for donating its facilities, and the multitude of teens and pre-teens who entertained and served the guests.

(See 22 images in our photo gallery from the party.)

The benefit, which highlights and supports services provided to children by the Archdiocese of Philadelphia, differs today from the earlier benefit parties in which the children were drawn from the network of Catholic orphanages. They no longer exist, thanks to the direct state financial aid given to families with needs.

In this generation most of the children come from the Out of School Time (OST) programs, most of which are in high poverty sections of the archdiocese. The children are still needy but in a different way.

“It’s always exciting. I tell people this time of year if you are feeling a little low, come to the party and you will realize how blessed you are and how good people are,” said Bishop John McIntyre, who oversees Catholic Social Services, the branch of the archdiocese that conducts social outreach for persons of all ages.

Most of the entertainment was provided by the Delaware County-based Catholic Community Choir, headed by Jeff Braconnier and his sister, Aimee-Kate.

“We have 65 kids here to sing and take part in the ‘Christmas Carol’ program,” Braconnier said. “This is a great tradition and the meaning of the season, and it is all worth it when you see the expressions on the kids’ faces when they come into the room.”

Also invited to attend were some of the major supporters of the various social programs of the archdiocese. Some of them have been doing it for many years, and probably none longer than Beneficial Bank, which traces its foundation to encouragement received from St. John Neumann in the 1850s.

“This event brings hope and it represents the true Christmas spirit,” said Robert Juliano, director of corporate giving at Beneficial.

From the viewpoint of the younger guests, the most important  dignitary was that jolly fellow in the red suit, Santa Claus, whose voice, as it has for many years,  sounded remarkably like that of Douglas Dunn, who teaches theology at Pope John Paul II High School.

“I’ll put presents under your tree,” he assured one and all, but in case there was a slip up, the children all got presents on the spot.

Mark and Josiah got Ninja Turtle action figures, Mary and Saniyah received this year’s most popular toy, dolls from the film “Frozen.”

Helping with the distribution were scores of elves drawn from various parochial schools, including St. Andrew in Newtown. Fifth grader Olivia Boruta said, “I’m very proud to be invited to a place when the archbishop is there.”

Kate Vyzaniaris, grade four, thought “it’s nice to hand out candy to kids who don’t have anything.”

But of course even elves like to get something from Santa at Christmas.

Kate’s wish was a bit tricky. “I’d like Mom to be convinced to have a puppy,” she said.

Puppies or not: Ho, Ho, Ho and a holy and happy Christmas.