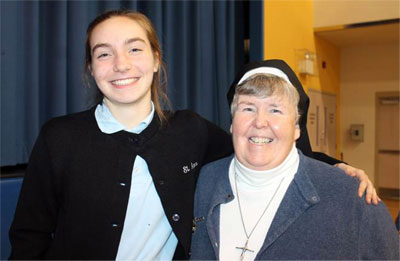 Julia Hirs, an eighth grader at St. Agnes School in West Chester, was named a Neumann Scholar this week by the Connelly Foundation.

Along with 34 other students also named Neumann Scholars in the Archdiocese of Philadelphia, Hirs will be awarded a four-year scholarship to attend one of the 17 archdiocesan high schools of her choice.

This year 900 eighth-grade students from 112 Catholic schools competed for the scholarships by taking an examination.

To be eligible, eighth-grade students must have attended an archdiocesan elementary school in seventh and eighth grade, earned a 92 average or above in the first marking period this year and scored a 90 or above in the national percentile of the seventh grade Terra Nova test or have a CSI of 120 or higher.

Hirs joins the following Neumann Scholar recipients of St. Agnes School since the scholarship’s inception in 1995: