For Benedictine, football coaching about passing on mission, values too 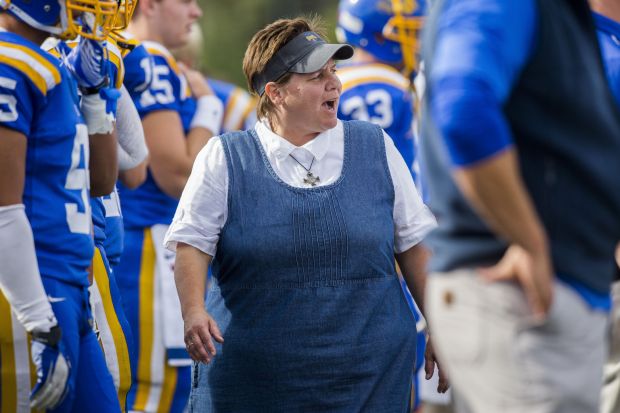 WASHINGTON (CNS) — Sister Lisa Maurer is a Benedictine nun who lives at the St. Scholastica Monastery, which shares a campus of the College of St. Scholastica in Duluth, Minnesota. She works at the Benedictine Health Center next to the monastery, serving senior members of the community. She prays, studies and ministers at local parishes.

She also happens to coach a men’s football team.

“I was never involved in coaching football … until this year,” Sister Lisa said in an interview with Catholic News Service. “I was around football only because my dad was a football coach, obviously my brothers played and, you know, football is a staple in America. So I’m a lover of football but never played or coached it until this year.”

Sister Lisa joined the monastery at St. Scholastica seven years ago, one year before the school established a football program. When the team began practicing in 2008 at a field right behind her residence, she said she would often go outside and watch.

“The football practice field … is literally in the backyard of the monastery, so that was my connection,” she said. “I would just wander out to the football field if I had a free afternoon, if they were practicing, maybe walk around our grounds and say my rosary and kind of just watch the guys.”

The Saints’ head coach, Kurt Ramler, who joined the team in March 2014, approached Sister Lisa and asked her if she would be interested in a coaching position. Though she was hesitant to take on a responsibility that might hinder her vocational duties, Sister Lisa said she felt the commitment would allow her to establish “that special relationship with the student-athletes” that she had experienced in her previous years of coaching girls’ volleyball, basketball and softball. 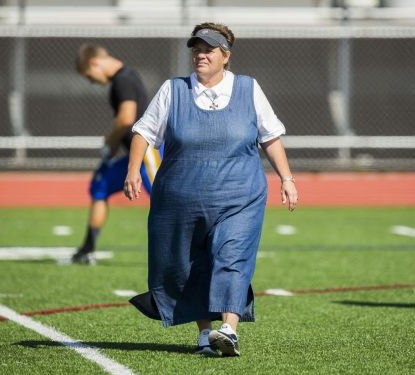 “Entering religious life, you have to think about all the things you give up and you have to go through that discernment, and leaving coaching was one of the things that I had to take along with the discerning, recognizing that that … would not be my top priority anymore,” she said. “When I … entered the monastery and the football team started practicing right in my backyard, it was an easy way for me to still feel connected to sports.”

Now, as the designated coach of the team’s kickers and punters and with a 10-1 record in her pocket, Sister Lisa said she focuses more on just teaching players how to excel on the field.

“It’s really about the mission and values of our Benedictine college, what it means to be upstanding young men, to grow into who and how God is calling them to be (and) to recognize that we’ve all been gifted and blessed,” she said. “They have an awesome opportunity to get a great Catholic college education … plus they’re getting to play football, and along with that comes responsibilities of character and being … a good role model,” she said.

Above all, Sister Lisa said she hopes the platform she has been given as a woman religious and football coach will focus attention on the presence of God in our everyday lives.

“If this gets one young person to think about a religious vocation or service to the church, that would just be outstanding,” she said. “That is very near and dear to my heart because, you know, in our day and age, with all the different voices and all the different influences that young people have, it saddens me to think that the voice of God and the call of God could be getting drowned out.

NEXT: Bonner-Prendie senior inducted into Pa. Sports Hall of Fame